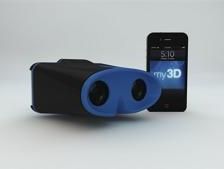 Toy giant Hasbro is preparing the launch of a new 3D-viewer for the Apple iPhone and iPod touch.

Hasbro Inc. is set to launch its My3D viewer for iPhone and iPod touch early next year.

Hasbro's My3D is set to allow iPhone and iPod touch users to view 3D content on their devices.

My3D resembles a pair of binoculars with a slot in which the user inserts his or her iPhone or iPod touch.

Brian Goldner, president and CEO of Hasbro said of the My3D: "The idea of being able to be somewhere in Los Angeles, in this 360-degree environment, to be in the shark tank, to be able to swim with the fish and chase after the fish. These are really breakthrough immersive experiences."

It is set to cost $30 in the US, with no word as yet on a UK launch or pricing. A US retail launch is penned in for some time next spring.

Apple has reportedly assisted Hasbro with its development of My3D accessory, as the device will require specialised apps to support display of the required 3D content.

In order to produce content for the 3D viewer, Hasbro has teamed up with Dreamworks Animation, in addition to partnering with a forthcoming 3D TV network backed by Discovery, Sony, and IMAX.

Shaw Wu, senior research analyst at Kaufman Bros. L.P. noted that: "The issue with this is whether they are going to get enough content for it."