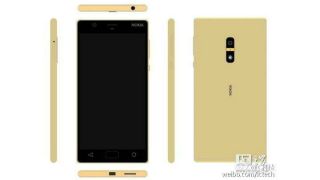 The fact that Nokia is about to make a comeback in the smartphone game has now become an open secret with leaks and rumours flying all over the internet.

Once the biggest mobile phone manufacturer in the world, Nokia’s fate was sealed after its decision in 2011 to partner with Microsoft’s Windows Phone and sideline Android. However, now its coming back, and that too with three handsets in the offing.

Of the three smartphones, two are tipped to be flagship devices with top of the line specifications and the third, dubbed the Nokia D1C, will be a mid-range device. What is interesting to note is fact is that past leaks suggested that the Nokia D1C was not a smartphone at all, but actually a tablet.

However, fresh leaks have emerged with images of the D1C revealing once  and for all that the device is in fact a smartphone. These images all  but confirm Nokia’s much awaited comeback into the smartphone game.

The   leaked images   show the smartphone having rounded metal edges, with capacitive  buttons at the front and volume and power buttons on the right. What is  interesting is that the Gold color variant of the device is expected to  come with a fingerprint scanner embedded in the Home button, while the  other color variants (White and Black) will lack this feature.

The D1C is set to come with a 64-bit Qualcomm Snapdragon 430 octa-core processor, 3GB of RAM, 32GB of internal storage, a fullHD screen (display size uncertain) and the Adreno 505 GPU.

While not confirmed, the device could come with a 13MP front and 8MP rear camera, with Android 7.0 Nougat on board. On the connectivity side, the device is set to support 4G LTE, Wi-Fi Bluetooth 4.0 as well as GPS/A-GPS.

Two flagships on their way

Disappointed that these are strictly mid-range specifications? Fret not, because rumors pointing to two high-end Nokia devices with 5.2/5.5-inch QuadHD displays have also been floating about.

These devices are set to come with the powerful Snapdragon 820 processor, a 22.6MP rear camera and 4K video recording support.

Leaks and rumours point to the high-end devices sporting a price tag of around Rs 30,000, while the D1C (the mid-range device) is expected to be priced south of Rs 20,000.

In October, Nokia   announced   via Twitter that it’s CEO Rajiv Suri will be a keynote speaker at MWC  2017. This further fuels the comeback rumours as the Mobile World  Congress is a perfect place to announce Nokia’s smartphone plans.

Are you excited for new smartphones by Nokia or do you believe these  rumours will amount to nothing? Sound off in the comments!