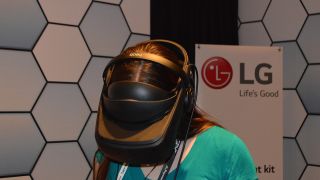 LG is building a rival to the Oculus Rift and the HTC Vive: we've seen a prototype in action, we think it's going to be called the LG UltraGear, and now a leaked patent has given us a fresh look at how the finished device is actually going to look.

Courtesy of Dutch site LetsGoDigital, the patent shows a design that's been tweaked from the original prototype version we saw earlier this year. One of the biggest changes is that the headset can be opened at the front, so the eyepieces split apart - presumably to make it easier to take a break from the immersive world of VR.

There are also integrated earbuds built into the headset for your audio needs. One of the sketches shows a user still listening to music with the split headset resting around his neck. A dial at the back is used for tightening and loosening the device.

We've had confirmation that the headset is going to support SteamVR games, so there should be plenty of content available when it sees the light of day. If it's going to stand a chance it's also going to need to be priced fairly competitively.

Based on the prototype, it will have the edge over its rivals in terms of specs, with a 1,440 x 1,280 pixel resolution per eye. On top of that it's offering a 110-degree field of view, and a refresh rate of 90Hz - though all those details are subject to change. Like the Vive and Rift, it needs to be tethered to a Windows 10 PC.

What we don't know yet is when we might see the finished version of the LG UltraGear, if that is to be its name. CES 2018 seems like a smart bet, and as soon as LG has anything official to share, we'll report back.