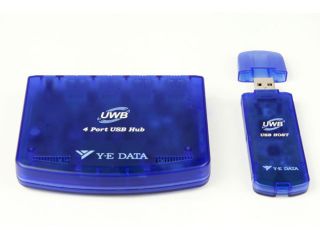 Y-E Data's WUSB hub isn't officially certified, but it still does the job.

If you've never come across WUSB , then you'd better get used to hearing all about Wireless USB, as the first products using the cable-free USB technology are starting to appear about now.

Also, it's not technically complaint with 'official' WUSB, so Y-E Data has to call it an Ultra-Wideband Wireless Hub (UWB), but that won't stop Japan's computer nerds lapping it up.

The technology promises wireless USB transfers between anything connected to the hub and a dongle that plugs into a PC over up to 10m. Speeds are similar to those from regular, wired USB 2.0 connections (480Mbit/s), so the attraction is in clearing up a little cable clutter. That and being first on the block to use yet another new wireless technology of course.