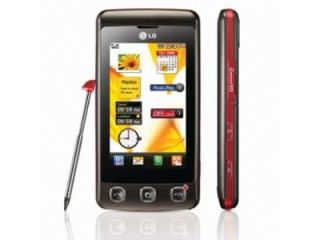 Those guys over at LG have clearly had a creative lunch with a few too many glasses of wine, deciding that the LG KP500, its new swing at the touchscreen budget market, needs to be called 'Cookie'.

But let's not dwell on such frivolities (because we feel like we might get lost in a sea of cute-naming confusion else) and let's look at the new handset LG hopes will convince more of us to go touch.

There's a stylus in my phone

The first notion is thatthe stylus, which many of us still want in a touchscreen handset, is baked right into the chassis, meaning you're less likely to lose it seven seconds after buying the phone.

Basically a 'fun' phone, it comes with a selection of motion-based games and also allows you to shake the home screen to align all your home screen widgets... it's the little things.

It's less that 12mm thick, it packs a 3in touchscreen display and a 3MP camera. However, it's only 2.75G, so don't expect to be downloading a whole host 'o stuff easily on the go.

But at £135 before tax and subsidy, this could be the first phone that makes touchscreen a more accessible concept for the masses.