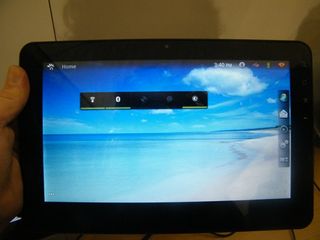 Even by the meagre standards of most of the Android tablets out there, the original Viewpad 10 was an absolute stinker.

While the hardware was pretty decent – it was powered by one of Intel's Atom chips – the software implementation was poor. It ran both archaic Android 1.6 and Windows 7 and it did neither particularly well.

The Viewpad 10s is a different animal though. It's a single boot, with Android 2.2 the OS of choice. It's also got an interesting Tap UI overlay, presumably designed to circumnavigate the usual pitfalls of running a phone OS on a tablet.

Performance of the tablet is pretty decent. The Tap UI is designed to make better use of the 10-inch screen, as until Android 3.0 comes out, it's very much a phone OS designed for smaller devices.

It adds some pretty neat new features, too. One such feature is Family Accounts, which allows every member of the family to have their own login. It's a good way to allow multiple users to customise and personalise the device without negatively impacting the experience of others.

It's good, too. While it's nowhere near as slick and impressive as the Blackberry Playbook, there was no lag, and the screen is responsive. It is rather heavy though, let's hope that's partly due to there being a decent battery in there – we'll test that at a later date.