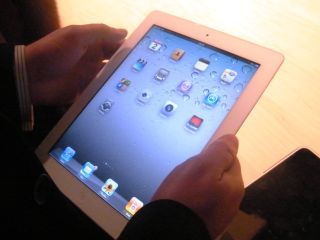 iPad 2 data deals are being announced by UK providers

Looking for the best iPad 2 data tariff? Look no further - we're collating details on the iPad 2 data deals from the major UK networks as we get them.

Orange is offering its customers the iPad 2 3G for £199 if you sign up for a two-year contract.

The offer is for the 16GB 3G iPad 2, and the £25 per month data package consists of 1GB of anytime data plus another 1GB of data from midnight to 4pm.

Like Orange, Vodafone is to sell the new Apple iPad 2 to its existing customers for £199, again for those willing to sign up to a two-year deal.

Data-wise, this package consists of a monthly data allowance of 2GB, plus 1GB of Wi-Fi access through BT OpenZone.

Additional data is charged at £15 per GB.

Full Vodafone iPad tariffs as shown above can be found on the Vodafone site.

T-Mobile has announced its subsidised iPad 2 pricing - stating that you'll be able to pick up the next-gen Apple device for £199 if you're already a customer of the network.

For that, you'll be getting the 16GB iPad 2, and you'll be signing up for a two-year data plan which is £25 a month for existing T-Mobilers and £2 more for new customers.

So, as an existing customer your total outlay over the two years would be £799 and as a new member of the T-Mobile club, it would be £877.

If you do want to take the T-Mobile plunge, T-Mobile will be taking orders online and on the phone from 5pm on 25 March

O2 is not offering any deals on the iPad 2, although the operator is offering a data package. O2 iPad 2 tariffs are as follows:

Customers can also add 500MB of data as a one-off amount if they are within a recurring data plan.

Three is selling the iPad 2 at 45 selected Three Stores.

You can check out Three's complete pricing on its iPad 2 page.

Apple's pricing for the iPad 2 is as follows

Prices are, including VAT: