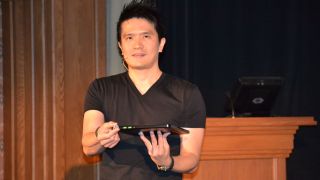 So thin it hurts

Razer today whipped out something slim and light, yet still packing plenty of gaming prowess.

The new Razer Blade is a gaming laptop that's as thin as a standing dime - literally - reaching just 0.66-inches thick. Like the Razer Pro refresh, it will run Intel's Haswell quad-core CPU.

CEO Min-Liang Tan said during the company's "Thinner than a Dime" press conference that the company took inspiration from the thinness and lightness of the MacBook Air and power of the Alienware M14X to instill the best of both in its new offering.

"Because we're a little crazy here at Razer, we decided to distill them both and combine them into a single reference point for an ultra-portable gaming system," Tan said.

Did you say thin?

"In a single sentence, it's the world's thinnest gaming laptop," he said before adding, "It's impossibly thin, insanely powerful and designed just for gaming."

It runs Windows 8, while the battery is aimed to last six hours. The way Tan tells it, the company got rid of all the superfluous hardware to keep the Razer Blade powerful yet light and slender.

"This, ladies and gentlemen, is how we at Razer bend the laws of physics," he said.

Pricing starts at $1,799 (around UK£1,182, AU$1,860) with pre-orders getting underway at 12 a.m. on June 3 in the U.S. and Canada. Razer reps said the company plans to make it global, but wants to be sure it can meet orders in a timely fashion before starting international roll outs.