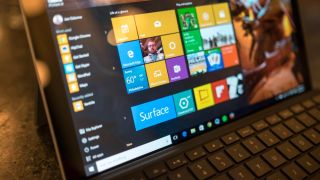 Microsoft is holding a big education-related launch event early next month where Windows 10 Cloud is expected to be revealed, and some fresh details have been leaked showing exactly how lightweight notebooks running this OS will compete with Google’s Chromebooks in the education sector.

You’ve almost certainly heard of Windows 10 Cloud – which is essentially a cut-down version of Windows that’s locked to running only universal apps from the Windows Store. Windows Central has published an internal Microsoft document showing performance targets for machines powered by the operating system.

The minimum spec for a Windows 10 Cloud (which could, apparently, also be christened Windows 10 S) notebook calls for an Intel Celeron quad-core processor or better, 4GB of RAM, 32GB storage – eMMC or SSD – or a minimum of 64GB of storage for a 64-bit machine, and at least a 40Wh battery.

According to the (not-so) confidential document, a stylus and touchscreen are optional, which obviously suggests that higher-end Windows 10 Cloud notebooks will benefit from them.

Microsoft is looking to equal Chromebooks in terms of battery life, aiming for 10+ hours of claimed longevity, just the same as Google’s cloudy notebooks. And in terms of real-world use, the firm wants to hit all-day battery life for students – something which Windows 10’s new power throttling feature may well help with.

These notebooks are also expected to compete pretty closely with Chromebooks in terms of boot times, with an anticipated cold boot to login screen time of 20 seconds, compared to 15 seconds for Google’s laptops.

Loading from the login screen to the actual desktop environment is expected to take five seconds, a process that is instant on a Chromebook.

Of course, we’ll still have to wait for the actual press event on May 2 for all this to be confirmed, but the nuggets of information spilled here seem both detailed and official.

As we said before, the grapevine has asserted that Microsoft won’t reveal a new Surface Book sequel at this spring event, although there is a chance we could see a Surface Pro 5 (but if we do, it will probably be a very minor refresh).

What’s looking more likely is a fresh 2-in-1 hybrid device powered by Windows 10 Cloud, as the operating system is likely to be very much the focus of the event, as well as knowing where the OS sits in the education arena (the event has been teased as ‘#MicrosoftEDU’, after all).

Of course, what Microsoft’s hardware partners will make of a ‘Surface Lite’ style device being launched at a much more wallet-friendly price tag than the rest of the Surface range remains to be seen. We can’t envisage any party poppers being set off by such manufacturers, though.