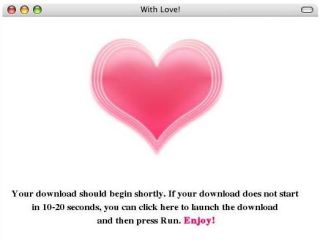 The Valentine's Day storm worm doesn't deliver romantic messages in the spirit of the day; rather an infected attachment that could compromise your computer instead. Email messages with subjects such as "I would dream" and "Memories of you" contains "withlove.exe" and other Valentine's Day-themed executable files attached.

The body of the email contains a link to an IP address-based website, which is actually one of the many compromised PCs in the storm network of computers. The website displays a large red heart, while installing malware onto your computer.

"This heart attack has been spammed out on a huge scale by an organised gang hellbent on stealing access to your computer for criminal purposes," said Graham Cluley, senior technology consultant at Sophos.

"It seems the hackers were too impatient to wait for Valentine's Day this year before plucking on heart strings in their attempt to infect the unwary. People will be truly lovesick if they let the malicious code run on their computer."

PC Tools warns consumers that the worm delivers rootkits and malicious code and maintains control of a computer system via peer-to-peer communications (P2P). If your computer gets infected, it may be compromised as a tool in identity theft and financial loss.

Sophos said that 8 per cent of 'romantic emails' - or one in every 12 messages - is likely to "break your computer's heart".

As per usual, the advice is to stay clear of suspicious and unsolicited emails, and make sure your computer is updated with the latest anti-virus software. Email worms pry on people's need for affection and curiousness, so think twice before you open any of the Valentine's Day-themed emails that are guaranteed to hit your inbox over the next few weeks.

"Your computer and the data on it is precious, and it needs to be protected. No-one should be blinded by an unexpected romantic message into clicking on links to unknown websites. The best defence is common sense, combined with up-to-date anti-virus software and spam protection at your gateway," Cluley added.