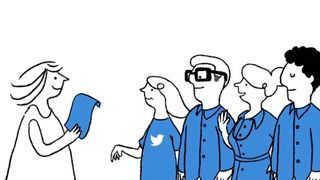 Sometimes the connections aren't obvious. A notorious rabble-rouser gets kicked off a social network here; an account verification system gets opened to the general public there.

But Twitter's banning of idiot orchestrator Milo Yiannopoulos and its announcement that ordinary users can apply for verified account status are part of the same thing. Twitter's trying to tame the trolls.

Trolls is probably the wrong word. For those of us who hung around USENET, CompuServe or the message boards of the early web, trolls were merry pranksters, cyber comedians aiming for a quick laugh, wind-up merchants with no underlying agenda.

But as the internet has grown uglier so has the meaning of troll. All too often it now means a spittle-flecked abuser using their freedom of speech to hurl hatred at others: women, people of color, people of different religions. Sometimes the trolls are lone wolves, but many times they hate in packs.

And they've got away with it for far too long.

The worst thing about the tweets sent to Ghostbusters actor Leslie Jones wasn't their content, as horrible as it was. It was their inevitability. Of course Jones was going to get online abuse. She's in the news! She's a woman! She's black!

So what are we going to do about it?

Twitter hasn't really done much about trolls so far, largely because of the freedom of speech argument: many people believe that Twitter is a public space where people should be free to post what they want to post. And that's a belief that Twitter has actively encouraged, positioning itself as the Facebook where you don't get censored.

But Twitter isn't a public space, and the public doesn't own it. It's a service owned and operated by a company, and that company has the right to decide what it does and doesn't want on that service. As the famous XKCD comic puts it, free speech means the government can't arrest people for what they say, but it doesn't mean that anybody else has to listen to their crap.

Here in the UK, of course, we don't have the first amendment, so people can be and have been arrested for what they say. But I think most Brits would agree with our American cousins that free speech is a good thing.

Are you sensing a "but" coming? You're right, there's a but coming. When public figures get trolled, they're often receiving death threats, rape threats, racist abuse.

To look at any public figure's Twitter feed is to stare into the abyss. Freedom of speech, my arse.

Twitter got it right and got it wrong this week. Banning Milo was a mistake, because it just reinforces his image as the man whose ideas are so dangerous The System / The Man / Liberals / Insert Group Here wants him silenced. But introducing verified accounts was a step in the right direction, because it ties Twitter IDs to real life.

If that sounds a bit like Facebook's real name policy, it is - but I think it's better, because on Twitter you can still use the service without being compelled to use your real name, which is important to all kinds of people for all kinds of perfectly good reasons. But by giving users the option to go for verified account status, Twitter is beginning to enable something useful: troll filtering.

For Twitter, policing people's tweets is a nightmare. But it's a nightmare with a very simple solution, and that's to offer filters. I've got a whole bunch of hashtags and phrases in my third-party app's mute list. Wouldn't it be great if you could also filter people?

I'm not talking about a block list. That's too primitive, and it's ineffective against tactics such as dogpiling. But Twitter could give users the option to block tweets from people meeting particular criteria.

You might want to block non-verified accounts, or people whose accounts were created in the last six weeks, or people with fewer than X followers. It wouldn't eliminate trolling altogether, but it would mean the targets wouldn't see the vast majority of it.

What that enables Twitter to do is to skirt the issue of censorship. By giving users the ability to change what they see, Twitter wouldn't be silencing anybody. It would just make sure that nobody is forced to listen to their bullsh*t.