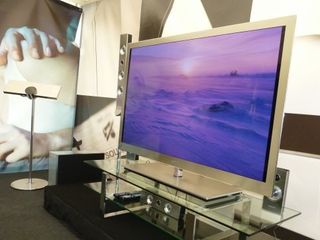 Samsung has shown off a range of high-end cinema components to partner with its flagship 9000 LED 3D TVs, with the THE 9 Series including a 7.1 home cinema package and a novel 3D Blu-ray player.

The Samsung 9000 series has wowed consumers with its ultra thin form-factor, and the company is keen to offer a range of good to match up to the television that don't spoil its mojo.

Home Cinema Choice has got a look at the prototypes for the THE 9 Series, and was told that the range was a completely new project.

"This is not an existing Samsung home theatre system with a high-grade cosmetic finish," marketing chief Russell Owens told HCC.

"THE 9 series is new from the ground up and is built from the finest components available. This is class leading home entertainment technology.

"This puts us in a position that no other consumer electronics company can match," he added.

"Only Samsung can produce cutting edge electronics with leading edge design in this way. Going forward THE 9 series will represent the best of the best."

The kit certainly looks the part, and you can see more exclusive photos over at HCC.techradar.com.

"The electronics, housed in the subwoofer, features Dolby Pro-Logic 11Z sound processing. The pedestal Blu-ray player loads discs in from a slot in the right hand side. "