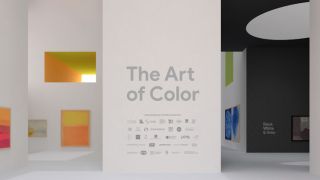 After a fix of color in your drab, monotonous life? It can be hard to get away from the office to wander an art exhibition – but Google's Arts & Culture app is hoping to bring an equivalent experience to your smartphone, all through the medium of AR (augmented reality).

Google's app is dedicated to showing off paintings and sculptures through your smartphone, and works alongside a number of high-profile museums and galleries.

The latest addition to the app, The Art of Color, consists of four AR 'rooms' that you can navigate in 3D with life-size paintings.

It's part of the app's Pocket Gallery, which first began its life in December 2018, with an AR collection of 36 paintings by the 17th century Dutch painter Johannes Vermeer (who painted the famous Girl With A Pearl Earring).

This time there are paintings by a variety of artists, all "captured in high resolution and selected according to each piece’s color palette" – with each room themed around particular shades, like "Blues & Greens", or "Black White and Gray".

Featured artists include Rembrant, Hokusai, Georgia O’Keeffe and Bridget Riley, with works having been selected through Google's Art Palette Tool – this allows you to search for artworks through the shades and tones of color in an image. You're restricted to artwork uploaded into the tool, but it's an intuitive way of discovering pieces of art in the style or mood of your liking, that makes use of Google's online algorithms.

You can download the app on either Android or iOS now.

Putting the AR in ART

Google's attempts at opening up access to canonical artworks is to be lauded, though the worlds of art and tech often have an uneasy relationship.

Traditional institutions are fighting to stay relevant in an increasingly digital media landscape, and are hoping that these kind of initiatives will increase interest in their collections – rather than make in-person exhibitions less necessary for accessing that art in the first place.

We've seen similar enterprises from BBC's Civilizations AR app, while the growth of AR-led headsets like the Magic Leap One show a promising future for AR experiences in people's homes, beyond squinting into a smartphone. With over 5 million downloads for the Android version of the Google Arts & Culture app, it looks like the art world has already snuck into a lot of people's pockets.