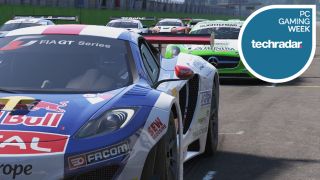 Slightly Mad Studios' decision to delay Project Cars' 1.0 release was a savvy one. When we previously played the game, its handling exhibited a tendency to fluctuate between temperamental and listless, but it's improved considerably since then.

As promised, the game now opens with a selection of handling presets, offering three simple starting points for a racing sim that is already highly customisable (you can, if you so wish, even assign buttons to adjust seat height, angle and distance from the wheel). From these broad foundations, it's easy to then further tweak your setup, such as starting with the Novice profile, but opting for manual gears and no traction control.

There's still a selection of sliders available to fine-tune handling characteristics, but the number of them has been reined in. It's a promising sign, indicative of a game eager to please with characterful design rather than one trying to offer permutations of every other popular handling model, no matter how ill-fitting it would be – despite Slightly Mad's claims, you never could make the game feel like OutRun anyway.

Cars now feel lively and communicative, even with a joypad, and this becomes even more apparent when you hop into something with less than 200hp and throw it around a tight circuit such as Brands Hatch Indy.

More powerful cars, meanwhile, are terrifying, and the way a Huayra torque-steers on straights or the way the weight of a rear-engine car unbalances you in a corner if you brake too late are brilliant touches.

You'll need to think about which tyres you're running for the given conditions, too, and on Pro settings you'll have to warm them up to performance temperature before attempting to push the car's limits. But even on Pro settings with all driving aids off, no car is unmanageable if you ensure your inputs are smooth.

Unless you're out in the rain, that is. Project Cars' wet-weather races are brilliant, high-pressure events that keep you on edge throughout and, thanks to some effective audio and visual effects, make you feel like reaching for an extra pullover by the second lap.

Your pit crew will communicate weather changes – via the DualShock speaker, if you're playing on PS4 – ahead of time, but you can also request pit stops while out on the track if a greying sky makes you nervous enough to want to switch to rubber with deeper tread.

The transitions between conditions are subtle and entirely convincing, while the game's fog effects deserve special mention. Project Cars is a fine looking game, though there's currently quite a gulf between the PC and console versions.

Project Cars is by no means ugly on console – all the images you see here were grabbed from the latest PS4 build – but while the car models and weather effects feel top notch, the trackside textures and lighting fail to meet the high standard of the PC version.

But even that build, in its present form, lacks the extra layers of polish it will need to compete with DriveClub's astonishing visuals. Evolution Studios' latest game may have had a bumpy start, but it set a new visual high-water mark even before precipitation was added in a recent update.

Of course, Project Cars is gunning for 60fps on all platforms, so it's unlikely that it will be able to better its rival on consoles even by release. And while it's certainly smoother, that higher framerate doesn't deliver a noticeably greater sense of speed.

More worryingly, opponent AI is a little skittish right now, even when dialled up to the supposedly brightest setting. Cars leave the track en masse in apparently poor racing-line decisions, and aggressive drivers are often more than happy to barge into you, open wheeler or not.

This is less of a problem in races featuring lower-powered saloons and super-minis – vehicles that can take a little rough and tumble and won't complain about some grass in their wheel arches – than it is with faster, more specialised machines.

Even so, the core driving model has progressed assuredly in the past few months and time-trial sessions are highly involved (assuming you keep tyre wear and fuel depletion on) and captivating. There are plenty of potential mechanical maladies that can befall you, too, such as a jammed wheel nut during a pit stop or aero damage from a misjudged rumble strip hit.

And all of this can be experienced from the unapologetically hardcore helmet cam, which is as close as any game has come to what it really feels like to be out on track in a performance-focused car. That the game is still suffering from AI and graphical issues so close to launch is undeniably concerning, but this latest look inspires confidence nonetheless.