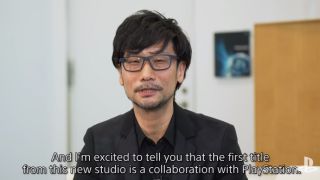 Hideo Kojima, father of the Metal Gear franchise (and Zone of the Enders, lest we forget) has announced that he is forming a new studio, Kojima Productions.

Kojima seemingly left publisher Konami in October, after the launch of Metal Gear Solid 5, and a question mark has been hanging over the fate of the videogame creator ever since – not to mention many question marks regarding the story behind his and Konami's divorce.

Now Kojima has officially confirmed the formation of his own studio, and that his first game will be a PS4 exclusive thanks to a new partnership with Sony.

It's a fitting collaboration, with Kojima and Sony having long shared a close relationship. Details of the new game remain a secret, but Kojima does say he plans for it to become a "compelling franchise."

A lot of fans are still crying out for Silent Hills, the collaboration between Kojima and film director Guillermo del Toro which got underway last year and was teased as a PS4 demo (titled PT) before the project was killed.

Konami owns the Silent Hills licence, so don't get your hopes up for seeing a revival. That said, there's nothing to stop Kojima building a similar horror game under a different name.

Kojima confirmed that his contract with Konami officially terminated on December 15, and he wasted no time before announcing his new project.

"I'm committed to be involved in creative activities for as long as I live," he said on Twitter. "Look forward to what's coming."

"I'm thrilled to embark on creating a new franchise with PlayStation that will give you all a new and innovative gaming experience so please stay tuned," said Kojima. You can see the message below.