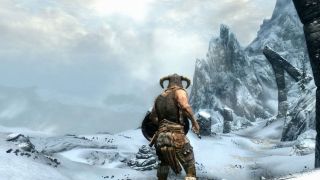 Skyrim - it wanted to be an MMO, but then it took an arrow to the knee

Elder Scrolls Online has been announced, an MMO that potentially has the fanbase to take on the likes of World of Warcraft and Star Wars: The Old Republic.

With Bethesda's latest addition to the Elder Scrolls Series - Skyrim - still riding high after taking the gaming charts by storm, it's clear that an MMO in the well-established universe makes a great deal of sense.

The game will be made by Zenimax Online Studio - an MMO specialist set up by Bethesda's parent company, and could be a major boost to the plucky old PC gaming platform.

Zenimax: "It will be extremely rewarding finally to unveil what we have been working on for several years."

"It will be extremely rewarding finally to unveil what we have been working on for several years," said Game Director Matt Firor in Game Informer - the title that broke the story.

"The entire team is committed to creating the best MMO ever made - and one that is worthy of the Elder Scrolls franchise.

The success of World of Warcraft has meant many of the major players attempting to capture the potentiallly huge audiences - and huge revenue - that an MMO can bring.

Elder Scrolls Online has great potential, although it remains to be seen if it really is an adventurer, or whether an arrow to the knee can stop it in its tracks.