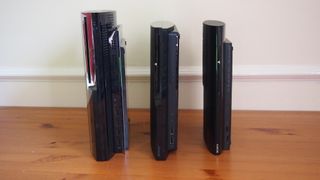 Are you one of the 70 million?

While overall video game hardware sales are down this year, Sony has some good news announcing it has sold 70 million PlayStation 3 consoles worldwide.

The 70 millionth sale came as of Nov. 4, which includes all PS3 models since the system launched in 2006.

While Sony is discussing numbers it was quick to mention that there are now 3,590 PS3 games available, which amounts to 595 million games sold worldwide.

PlayStation Network, the PS3's free online service, is now available in 59 countries worldwide, while the PlayStation Move controller, which adds motion control similar to the Nintendo Wii, has sold more than 15 million units as of Nov. 11.

The announcement sees Sony catching up to the Xbox 360, which reached the 70 million total unit sales milestone at the end of September.

While Sony and Microsoft battle it out in the console race, they're fighting for second place. Nintendo announced in September that the Wii reached 97.2 million sales since its launch.

Eyes are now turning toward the next generation of gaming hardware, which begins this month as the Wii U launches worldwide.

New consoles from Sony and Microsoft are also in the works, commonly referred to as the PS4 and Xbox 720, though details are scarce on either system.

Rumors peg the new systems for release sometime toward the end of 2013, or even falling back into 2014, so hopefully Sony still has some life to squeeze out of the PS3.

A new PS3 model, dubbed "super slim", launched just a few months ago, so it seems Sony still has a few tricks up its sleeve before passing the torch to the console's successor.