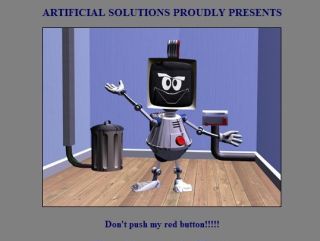 Elbot - three out of twelve

Five computers competing in a Turing test at the University of Reading used tricks and jokes in order to fool the judges – but ultimately failed to win a pass mark.

The Turing test, created by Alan Turing, posits that for an AI to be recognised as such it must fool a human in a conversation into thinking that they are talking to another human.

The University of Reading attracted six contestants – reduced to five after one could not be set up in time – and although the most successful entrant walked away with a cash prize – its 25 per cent success rate was not enough to get the Turing seal of approval.

The winner was Elbot – created by Fred Roberts – winning the Loebner Artificial Intelligence Prize's bronze medal for an impressive showing in which it convinced three of the 12 judges that it was actually the human.

How did it manage this? Well is appears that an impressive opening gambit of joking about being a machine lured produced a fine double bluff.

"Hi. How's it going?" one judge began. "I feel terrible today," Elbot replied. "This morning I made a mistake and poured milk over my breakfast instead of oil, and it rusted before I could eat it."