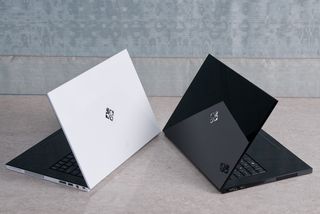 Hewlett-Packard’s gaming PC brand ‘Voodoo’ has unveiled not one, but two, ultra high-end PCs this week, a MacBook Air ‘killer’ (the Envy) and a brushed aluminium desktop (the Omen) – both clearly designed to compete with Apple in the ‘designer computer’ market.

Voodoo’s Omen desktop PC, features a 7-inch built-in secondary display. Although, be warned, it also comes with a rather unpalatable starting price tag of $7000 and will only be made available to previous customers by invitation only.

If you are a keen PC gamer with money to burn, then you might want to join Voodoo’s exclusive ‘Omen’ club purely to enjoy how cold your air-brushed aluminium PC is because it rocks "one of the most advanced liquid cooling systems on the planet."

Of more interest to normal people is the MacBook Air competitor, the carbon fiber Voodoo ‘Envy’ which, although costly, is a tad more affordable than its new desktop older brother, costing $2099 (around £1050)

The Envy breaks with Voodoo tradition, in that it is not being marketed as a gaming PC, but instead is a rather tasty 13.3-inch ultra-portable featuring – breathe in - an LED-backlit display, 1,280 x 800 resolution, Intel GMA X3100 graphics, 1.8GHz Intel Core 2 Duo SP7700 processor, HDMI, 2x USB (1 of which doubles as eSATA) and` hard disk or SSD option.

Perhaps the coolest feature is the “instant-on Voodoo IOS mode” so you can get online immediately without booting into Windows. The power supply also doubles up as a Wi-Fi access point.

It’s ticking all the boxes here, although as we all know from bitter experience an impressive features list does not always a decent computer make!

TechRadar should be bringing you a full hands on with the Voodoo Envy as soon as we can get our mitts on a test kit.