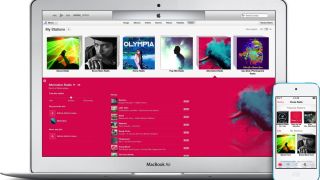 Apple's iTunes Radio streaming service could be set for an imminent launch outside the United States, with the service reportedly showing up on iOS devices in the UK and Canada.

AppleInsider brings word from readers on both sides of the Atlantic who've seen the iTunes Radio service show up within the Music app on their iPhone, iPad and iPod touch devices.

In the UK, the users say they're able to stream music using iTunes Radio, while the Canadians who're seeing the service are as yet unable to use it.

Apple has not made any announcement regarding the international launch of iTunes Radio and it is thought the company has been working on the licensing deals necessary for a roll-out outside the U.S.

iTunes Radio was announced at WWDC in June last year, as Apple's answer to Spotify and other dedicated online radio services like Pandora.

The service allows users to play custom radio stations based on songs, artists or genres, or choose from playlists curated by Apple or guest DJs.

If users take a liking to particular songs, they can add them to their iTunes library by purchasing the song from within the Radio portion of the music app.

Have you seen iTunes Radio appear within your Music app yet? Let us know in the comments section below.