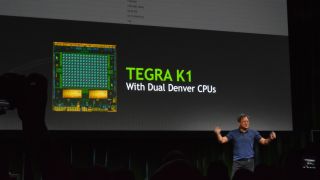 Nvidia's Huang is one happy man

Huang, who was feeling under the weather, managed to make it through a litany of announcements, not least of which was the introduction of the world's first mobile chip with 192 CUDA cores, the mighty Tegra K1.

"We could do eight cores, but that seems pretty pedestrian, pretty obvious," he mused before drawing back the curtain on the K1. "We could do 12 cores - that's more than eight. However, I think that maybe we can do better than that."

And with that, Huang unveiled the new mobile processor. Of course, Nvidia is somewhat guilty of mixing CPU and graphics cores with that eight and 12 core comparison. Graphics cores are a very different matter and the Tegra K1's 192 cores are nothing like having 192 CPU cores.

What's more, many were expecting Nvidia to announce the Tegra 5 at the Vegas show, but the CEO explained why that wasn't the case.

"This is the first GPU that took that took a vast jump from the previous generation," he said. "It's almost inappropriate to call it Tegra 5. This the most successful architecture we've ever created."

The "K" in K1 comes from the fact that the new processor is built on Kepler architecture, what Huang called "the most successful GPU we've ever created, and [the] most important GPU architecture in the entire industry."

"We've brought mobile computing to the same level of desktop computing," he continued. "We've brought the heart of GeForce and the soul of Tesla to the Tegra family."

There's no word yet on how much mobile devices equipped with this new super chip will cost, but when it becomes available, gamers will see more photo-realistic content and support for next-gen engines, like Epic Games' Unreal Engine 4.

The press conference's demos, which included looks at UE4 running on Tegra K1, were crisp, the light bright and shadows dark.

"This is real time computer graphics on a little mobile chip," Huang declared.

It was an impressive stage showing, though one that we'll need to test in real world scenarios at the chip's unannounced release date.

Before he was done with Tegra K1, Huang laid a "one more thing" surprise; that the new chip will be available in 32-bit quad-core and 64-bit dual-core (Denver) configurations.Two for the price of one announcement, it would seem, but those quad- and dual-core configs underline just how misleading Nvidia's 192-core claim is, taken out of context.

Tegra K1 was certainly the event's main course, but Huang also gave the gathered room an appetizer in the form of the company's PC bread and butter.

"For Nvidia, next-gen PC gaming starts with GeForce," he said.

He noted that GeForce Experience has been downloaded 20 million times before launching into a demo of GameStream, which lets gamers stream a title to their Shield from the cloud or PC. Nvidia has captured as little lag as possible, he noted, and can stream across oceans.

To continue the push towards better gaming, particularly through visual performance, Huang announced that Nvidia's G-Sync tech is coming to monitors from several vendors in the second quarter of the year.

Acer, AOC, Asus, Benq, Philips and ViewSonic are all on deck to release three varieties of 27-inch, G-Sync module-equipped monitors. Philips in fact has already announced such a display; the 272G5DYEB is a mouthful, but its 1080p display takes advantage of G-Sync's power of synchronizing display refresh rates with the GPU.

Finally, the rather long presentation was wrapped up with a look at four-wheeled supercomputers.

"We've had a love affair with the automotive industry for two decades," Huang declared.

Earlier the under-the-weather exec had said Nvidia believes "the car will be our most personal robot some day," and to that end the company has created Tegra K1 VCM, essentially bringing the new chip into autos. It will be able to aid in things like advanced driver assistance.

Turning to the makers of the things that go vroom, Project Mercury was brought to the fore. It's a tool that helps car designers build a digital dashboard, and the final piece of Nvidia's CES focus on gaming and automobiles.