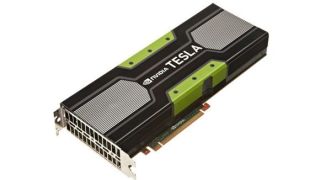 Behind every world's fastest supercomputer is a high-performance visual processor, and in the case of the new Titan comp, that GPU is the Nvidia Tesla K20X.

Nvidia's newly unveiled graphics accelerator is part of the company's K20 line, which not only boasts the highest performance, but also manages to be the most energy efficient.

With Titan packing 18,688 Tesla K20X GPU accelerators, the newly crowned supercomputer has a performance record of 17.59 petaflops, or 17.59 quadrillion calculations per second.

"We are taking advantage of Nvidia GPU architectures to significantly accelerate simulations," said Thomas Schulthess, professor of computational physics at ETH Zurich and director of the Swiss National Supercomputing Center in a press release.

According to the professor, such simulations will benefit fields of climate and meteorology, seismology, astrophysics, fluid mechanics, materials science and molecular biophysics.

All in the K20 family

The K20X, the flagship of Nvidia's Tesla line, surpasses all other processors with 3.95 teraflops single-precision and 1.31 teraflops double-precision peak floating point performance.

Both the K20X and K20 are based on Nvidia's Kepler compute architecture and have enabled more than 30 petaflops of performance delivered in the last 30 days.

According to Nvidia, this is equivalent to the computational performance of last year's 10 fastest supercomputers combined.

The fastest, most efficient GPU for now

The Titan supercomputer, with the help of the Nvidia K20X, took the top spot on Top 500's biannual list of the world's top supercomputers this week.

However, with the way tech specs advance, the Titan can be quickly knocked out of contention in six months.

It replaces the new No. 2, the IBM Sequoia, which itself replaced the new No. 3, the Fujitsu's K computer.

In addition to appearing at the Oak Ridge National Laboratory in Oak Ridge, Tenn., where the Titan supercomputer is located, K20 GPUs are going out to labs and universities worldwide.

International locations King Abdullah University of Science and Technology and Shanghai Jiao Tong University are also destined to be part of the exclusive K20 GPU club.