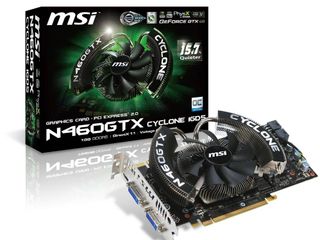 The cards also come with GPU overvoltage support through MSI's afterburner overclocking software – which can apparently boost performance by 30 per cent.

And, MSI believes that it has shaved more than 15 per cent off of the noise generated by the reference design with the N460 GTX series.

Dealing with the heat

"MSI N460GTX Cyclone Series is equipped with the exclusive Cyclone thermal design. After sinking the heat from the GPU with the nickel-plated copper base, two heat pipes evenly transfer the heat to the fins, explains MSI.

"Aside from effectively reducing the GPU temperature compared to the reference cooler, the Cyclone thermal design can reduce noise by up to 15.7%.

"N460GTX Cyclone series maintains a balance between cooling and noise to deliver a quiet and cool platform."