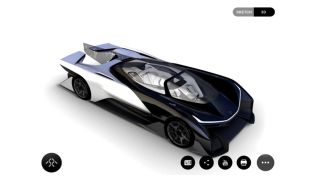 An iOS app meant to release alongside the vehicle's unveiling jumped the gun, spoiling the surprise. Before the app could be taken down, Twitter user @supererogatory was able to capture images from the app, with a mirror saved on App Shopper confirming its presence.

In addition to the car's design, which looks ripped straight from science fiction, the leaked images also tout a few choice features such as autonomous driving and a digital canvas tail fin that functions as both an aerodynamic support and electronic display.

Faraday's concept car also claims to sport an impressive 1,000 horsepower Quad Core drive, capable of top speeds of 200mph and going from 0 to 60mph in less than three seconds. To compare, the Tesla Model X can go zero-to-sixty in 3.2 seconds, while the 417 horsepower Tesla Model S 85D takes 4.2 seconds.

The concept was teased back in late November, showing off just a few short glimpses and hyping up to tonight's big reveal, keeping in brand with Faraday Future's sense of mystery, popping out of nowhere as a relative unknown in the auto industry.