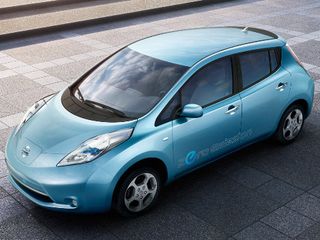 All-electric Leaf to please lungs and hippies from 2010

Yesterday, Nissan unveiled the Leaf, an all-electric hatchback with a range of 100 miles between charges.

Its lithium ion batteries will be able to recharged to 80 per cent of capacity within half an hour, using high-speed chargers at petrol stations and car parks, or in around eight hours at home.

The car is expected to go on sale late next year, with a mass-market roll-out in Europe, the USA and Japan during 2012.

The Leaf will link up with mobile phones, allowing owners to set the heater or AC running before they get in, or reset charging. The car will also report the condition of its battery and engine directly to Renault-Nissan, meaning that owners won't even have to visit a garage to be alerted to any mechanical difficulties.

According to the press release: "Just as leaves purify the air in nature, so Nissan Leaf purifies mobility by taking emissions out of the driving experience." Hmmm. Apart from the massive environmental costs involved in making a metal car, giving it 24 kWh of storage using increasingly scarce rare-earth metals, putting rubber and particulate-packed tyres on it, and then generating the electricity to run it, of course.

Its 80kW electric motor can propel it at up to 90mph and its 100mph range should satisfy roughly 70 per cent of consumers' daily driving needs. Although the Leaf will be made in Japan and the USA, UK plants will be used for some lithium ion battery components.

Pricing for the Leaf has yet to confirmed (which is code for, "Let's see what the new Prius, Insight, Volt and Model S sedan sell for first") but it will probably involve leasing the expensive batteries and a sticker price of around £20,000.