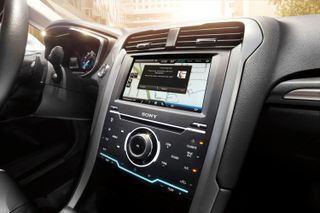 Ford shows existing owners that have SYNC with MyFord Touch some love today with a free software update that enables Apple Siri Eyes-Free functionality on 2011 and newer cars. Despite the focus on the latest SYNC 3 infotainment system, Ford can't escape MyFord Touch as it's in over 5-million cars on the road and still available in new 2016 model year vehicles.

This update gives Ford the edge over other manufacturers by adding a new feature five years after the vehicle's release.

Eyes-Free lets drivers pair their iPhone to the infotainment system and access Siri functions with a long-press of the voice recognition button placed on the steering wheel so you can go on an expedition while sending texts, make calls, use Apple Maps, set reminders and use all Siri functions using the car's microphone and speakers.

Ford is quite flexible and lets owners install the update themselves. The download is available through Ford's owner portal starting today. I was unable to explore the owner's portal or upgrade process since I don't own a Ford, unfortunately.