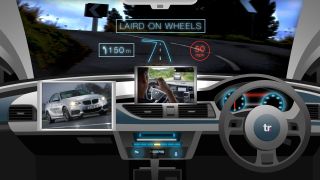 If we're going to have sophisticated in-car features like internet connectivity and high-def navigation, can we please have the computing power to go with it?

This week I've been driving the new Mercedes-Benz S-Class. It might just be the best car in the world (look out for our in-depth report, soon). But by some metrics, it's hopelessly short on computing power.

Driving it, I've been reminded about the BMW 7 Series that was claimed to have more computing power than the Apollo moon shot, right? That was back in 1977.

It's now 2014 and I'm constantly amazed by brand new cars with CPUs so slow, they can barely render the webpages, graphics and maps thrown up by built-in multimedia systems.

Of course, you wonder why you'd want a web browser in a car. The browser in the new S-Class (and other current Mercedes) is certainly useless.

Actually, before you think I'm harshing on Mercedes, nearly every car company is guilty of this kind of thing.

Another good example is the Tesla Model S. In some regards, its massive touch screen is a revelation. But in some parts of the interface, performance is tragically slow to the point of ruining the experience.

Part of the problem is expectations created by the latest smartphones and tablet computers. If your smartphone scrolls webpages super smoothly and your tablet renders Google Maps without the slightest glitch, surely your car should be able to manage the same trick?

Car companies will tell you that development lead times are longer for cars, making it harder to have the latest CPUs or graphics cores in-car.

Yes, lead times are longer. But that's no reason to design an in-car interface with horrible frame rates. Either make the interface simpler or use more expensive chips. Embedded chips with sufficient power have been around for a few years now. Car makers just haven't been spending enough to buy the fast ones.

Audi's got the right idea

Fortunately, I've recently detected that change is in the air. Audi is the first car company to my knowledge to talk about the frame-rate performance of its in-car system, promising 60fps for the newly revised MMI platform in the new TT courtesy of a pair of quad-core Nvidia CPUs.

The other option, of course, is to use those aforementioned smartphones and tablets to actually power in-car interfaces. And many companies including indeed Mercedes do offer just such functionality.

But I'm not convinced that's a total solution to the problem. Using a mobile device to power apps and multimedia is fine. But some functionality probably needs to remain in the car. For me, navigation is done best when it's fully integrated, for instance.

Anyway, as in-car systems become ever more ambitious, it's about time car makers provided additional computing horsepower to go with all those ponies under the bonnet.