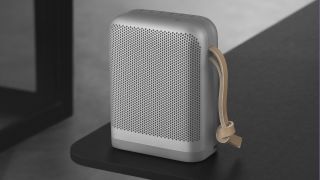 Looking to add a splash of style to the increasingly cramped portable smart speaker market, the B&O Beoplay P6 has arrived, clad in aluminum and capable of blasting out 215W of audio.

If its looks are familiar, it's because the makers of the Beoplay P6 have trawled through the B&O archives and created something that has a hint of the design the Bang & Olufsen Beomaster 6000 amp that was created by designer Jacob Jenson in the mid 1970s.

To bring it up to date, however, B&O Play has been given the speakers a OneTouch Button to enable the integration of smart features. You can also access Siri or Google Assistant on your phone through the speaker, and accept calls.

Playback time is a not-too-shabby 16 hours and that 215W of audio is made up of one 36W Class D woofer and two 30W Class D full tone for a total of 215W peak power.

Those worried about taking a chunk of metal outside with them on a rainy day need not worry, as the speaker is splash and dust resistant,. Even so, this is almost certainly a speaker that you'll want to carry between different rooms in your house, rather than an outside space.

It's been given some soft touches to counteract its metal looks, including a leather strap for holding the thing and soft, tactile buttons. Anyone that's seen, or played, the Beoplay A1 will be right at home with the look of the thing.