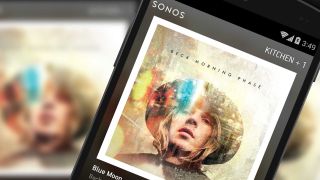 Update: As of now, the updated Sonos controller app has come out of beta and is available on iOS and Android.

Any device running iOS 6 or higher, or Android 2.1 and above, will be able to download the updated app either from the App Store or Google Play, or via an in-app notification.

Sonos has revealed a new controller app that makes it easier to find the tunes you want to listen to through the wireless system.

This will be welcome news for anyone with a Sonos set-up as the now five-year-old app has struggled with the growing number of services compatible with the wireless set-up.

So the new app aims to make things easier - in fact, Sonos wants to make switching on music "as simple as turning on the lights" so there'll be fewer steps between firing up the app and hitting play thanks to a simpler design.

Sonos has taken some design inspiration from iOS 7, so the app is a lot cleaner and flatter than its predecessor.

The search function has been revamped to look through all your music services as well as your local music library from a single search box.

The new Sonos app originally went into public beta for Android users in March before hitting Google Play and the Apple App Store in May.

The desktop and Mac controllers will also get a refresh later this year - but for now, feast your eyes on our pics of the new app in action.