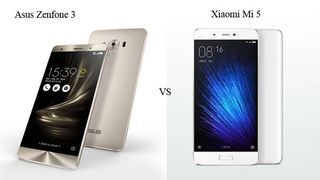 The ASUS ZenFone 3 is currently trending in India, partly because it was unveiled only two days ago. The company continued its tradition of confusing the market with like-named offerings that feature slightly different hardware. However, the pricing will be a key differentiator here. So how does it fare against a mobile industry juggernaut like the Xiaomi Mi 5? Well, let's take a look.

Not often do we speak about the design as one of the key features, but we have to make that exception with the ZenFone 3. It comes with a very attractive outer shell, consisting of a 2.5D curved glass on both sides, thus appealing to the premium smartphone lovers. The addition of the Snapdragon 625 (2 GHz octa-core) chipset makes the handset a very exciting prospect as well.

The Xiaomi Mi 5 is no slouch when it comes to design either and features a 3D glass body on the back, which is perfectly contoured for a superior grip. Much like the ZenFone 3, performance is the key here thanks to the powerful Snapdragon 820 chip.

The ZenFone 3 is available in a 5.2-inch model and a 5.5-inch variant, leading to some confusion among prospective buyers. Both have a resolution of 1080p, however.

The ZenFone 3 models come with 16MP (f/2.0) cameras on the back and 8MP (f/2.0) front cameras, suggesting that there's no compromise in the camera department.

The Mi 5 is sporting a 16MP (f/2.0) rear camera and a wide-angle 4MP front camera, so there's very little to differentiate between the two in this regard.

The Mi 5, with its quad-core Snapdragon 820 processor is undoubtedly one of the best phones going around. However, the ZenFone 3 isn't far behind with the Snapdragon 625 chipset, which comes with octa-core 2.0 GHz (Cortex-A53) CPU cores. In fact, the performance might well be neck and neck, so we can't really determine a winner here until there is a detailed benchmarks comparison between the two phones.

The two variants of the ZenFone 3 come with varying battery capacities. The entry level model comes with a 2,650mAh unit, while the high-end variant sports a more respectable 3,000mAh battery under the hood.

The Mi 5 on the other hand comes in only one variant, which has a 3,000mAh battery underneath. Going by this, it seems like all handsets should offer pretty similar battery standby, with the base model of the ZenFone 3 slightly lagging behind.

The Mi 5 is available in a 32GB + 3GB configuration in India. Although the manufacturer has higher storage and RAM variants in China, India has only seen the launch of this one model.

The ZenFone 3 lineup, on the other hand, also starts in a 32GB + 3GB config, but there's a 4GB + 64GB model available as well for a higher price. One key advantage with the ZenFone 3 is the fact that it comes with a microSD card slot which can allow storage modules of up to 2TB.

Both the Mi 5 and the ZenFone 3 feature fingerprint scanners and the reversible USB Type-C port on the bottom.

The Mi 5 is currently available from Flipkart and Amazon for Rs 24,999. There's no flash sale or pre-registration required to get the handset and you can order it right away to get it as early as tomorrow depending on your location.

The ZenFone 3 is currently listed on Flipkart and Amazon, but only in the Black 32GB + 3GB RAM configuration, with the White version and the 64GB model listed as coming soon. The 32GB model is priced at Rs 21,999, while the 4GB + 64GB model will cost Rs 27,999 in India.