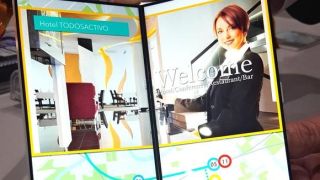 Smartphone display manufacturer, Japan Display, has created a prototype for a phone that’s able to fold open and close like a book.

The display is comprised of two LCD panels, hinged together with a gap of less than 2 millimeters between them. When the smartphone is unfolded, the screens can be used as one large display that would be suited to watching videos or reading. The screens can also be used separately, perhaps to watch media on one side while taking notes on the other.

According to Nikkei, Japan Display is working with a Chinese smartphone manufacturer to create a handset that will use this kind of display and debut in the summer of 2017.

The smartphone maker, which is yet to be disclosed, is apparently a major global brand which would mean that the order numbers for these displays would likely be consistently high, giving Japan Display good reason to have interest in the continuation of the partnership.

Japan Display isn’t the first display manufacturer to work on a folding display of this nature; Samsung has filed several patents for folding displays, showed off a prototype at CES in 2011, and even created an ad for a concept folding smartphone that was shown at CES in 2013.

Samsung's journey to creating a folding smartphone has been a long one but there are rumors that the company will finally launch its folding device, named the Galaxy X, next year.

It’ll be interesting to see what the result of the partnership between Japan Display and the mystery Chinese smartphone manufacturer will be, especially if the result does indeed launch as soon as summer and coincides with a similar release from Samsung.

Regardless, it’s looking ever more likely that folding smartphones are in our immediate future.