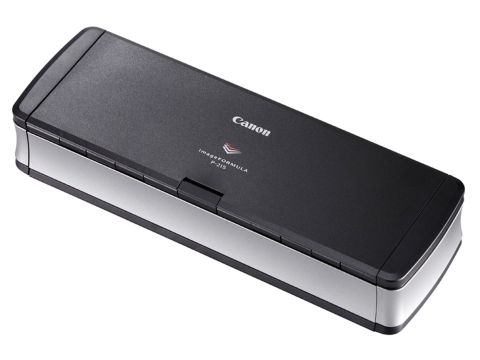 Small, fast and light scanning courtesy of this fantastic scanner

It's certainly portable, and won't take up too much extra space in your luggage. It comes with two USB cables - one for power and one for data.

It's nice that it doesn't need mains power, too - it can actually work with just the data USB cable connected, although the scan speeds are slower. It's not by much, and with the power plugged in, an A4 colour scan took just 14.11 seconds. Making things even quicker, it's able to detect if the document you're scanning has words and images on both sides of the paper. If it does, it has a Duplex feature that scans both sides at once, barely making a dent in performance.

It also did much better than the Canon imageFORMULA P-150M when it came to scanning multiple documents from the feed tray. Where the older P-150M would end up misfeeding the pages, resulting in some poor scans, the P-215 worked flawlessly.

The CaptureOnTouch software that comes with the scanner isn't bad, although it takes a bit of exploring to get to grips with. Once you've uncovered the output settings, you can set it to create PDF, JPG, Bitmap, TIFF or PPTX files, and you can assign the scan button on the body of the scanner to automatically scan in your desired format.

Even on the highest quality setting, the Canon imageFORMULA P-215 was fast, and the results were excellent.