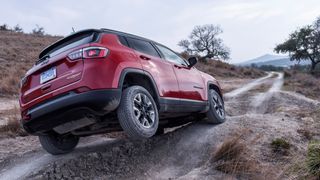 When technology works, it’s amazing and even life-altering. You wonder how you communicated without a smartphone, or how you connected with people before social media existed. With cars, there are safety features that can seem almost magical. The car takes over for you and performs and operation you might not be able to do yourself.

Case in point is the 2020 Jeep Compass Trailhawk 4x4 and the Selec-Terrain feature I tested recently. It’s designed to intelligently manage the drivetrain for you in certain conditions, such as muddy roads or snow and ice. I tested the Snow setting for an entire week because, in my area, the snow moved in for several days in blizzard-like conditions.

This 4x4 crossover kept me centered on the road during an ice storm, even preventing the car from fish-tailing when I overcompensated. I was amazed at how the Compass Trailhawk intelligently managed power evenly to the tires even though I was fighting against the algorithms at times. According to the Jeep reps who told me about how Selec-Terrain works, the car automatically detects slippage on tires when you use Snow mode. The vehicle then provides more torque to the wheels that do have better grip on the road.

In real-time, it’s an interesting sensation. A passenger with me also felt the change – the car seems to take over slightly. What would normally happen – you’d fishtail and slide into the ditch – feels more like guardrails on the car that keep you straight. And, you don’t need to do anything differently other than keep driving and avoid overreacting.

Another feature related to Snow mode is that the Jeep will use second gear when you first start out on the road, avoiding the temptation to punch it too fast and then spin out. This is similar to what happens in other vehicles by Infiniti and in other 4x4 vehicles.

The Electronic Stability Control (or ESC) also kicks in when you use Snow mode. This well-known and common feature will constantly watch for strange behavior, such as the potential to fishtail, and attempt to correct you quickly.

In the future, I’m expecting cars to go to the next step. We won’t need to select the drive mode anymore, but instead, the car will know it is snowing or know that the road is muddy or wet. This might be based on current weather conditions but more likely the car will use sensors to interpret the road conditions in real-time.

It’s not rocket science, actually. Today, windshield wipers can detect when it’s raining by monitoring for wetness. They use a beam that knows when there is water obstructing the view and can even measure the amount of water. If it’s a light rain that is barely noticeable, the wipers won’t activate.

In a similar way, road sensors could look for environment conditions on the road or take readings from the city or sensors on the road. Icy pavement on a country road? A future car would know it should activate Snow mode for the drivetrain. We’d be able to focus even more on driving and know that the car is adjusting itself on the fly.