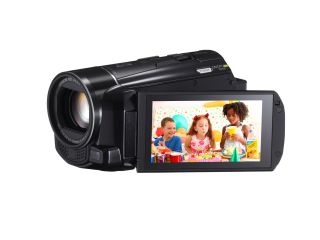 These pocket shooters come with a range of functionality, and all three offer a 7.5-cm touchscreen and Canon HD CMOS Pro Sensor with 10x HD Video lens "to provide outstanding, professional-quality Full HD video, even in low light" – in fact, a 20% increase in low-light performance if Canon is to be believed.

The first two models, the M52 and the M56, both also come with Wi-Fi connectivity and the ability to record to MP4, which works wonders when combined with the iOS Movie Uploader app to connect directly to iOS devices such as iPads or iPhones.

Each device also comes with Audio Scene Select to choose the correct sound profile for the scenario you're trying to shoot, and Optical Intelligent IS, which automatically adapts the IS settings based on the scene being filmed to capture footage more easily on the go.

All three devices come with SDXC memory card slots, while the M52 comes with 32GB of onboard storage, the M56 with 8GB and the M506 left with nothing – so you'd better invest in a decent card.

The Canon Legria M-Series release date has been set for April 2012, although no word on US or UK price as yet.