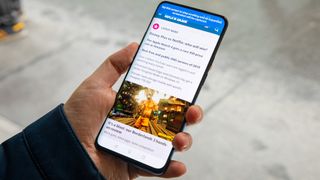 We've got high hopes for the upcoming OnePlus 8 series of phones, based on the leaks and rumors we've seen so far, and now it looks like a headline feature of the devices could be screens with an impressive 120Hz refresh rate.

We say that because OnePlus has invited Chinese media to an event at its headquarters in Shenzen on January 13, where it looks set to show off its new display technology. According to the Weibo user who shared the invitation, this is set to include a 120Hz screen, which could well find its way onto the OnePlus 8.

A 120Hz screen refreshes twice as regularly as a normal phone, making the viewing experience much smoother than with a regular screen. So far, the Asus ROG Phone 2 and Razer Phone 2 are two of just a handful of phones to have this kind of screen, although a few handsets in 2019 pushed into the 90Hz realm, including the OnePlus 7 Pro.

It's worth pointing out that we've previously heard rumors about the OnePlus 8 series having 120Hz screens, some of which suggested that all three expected OnePlus 8 phones will have 120hz displays, and others which claim the OnePlus 8 Lite will stick with 90Hz.

Leaks are one thing, but the company officially confirming that it's working on new screen tech, with a media invite that's unambiguously indicating display innovations (it shows a display) is another, and it gives us a lot more reason to believe the company's newest devices will have top-end panels.

We'll know for sure on January 13, when the Shenzen event takes place, and if there's anything new to report we'll make sure to bring it to you.