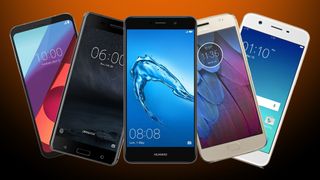 While handsets like the Samsung Galaxy Note 10, iPhone 11 and the Google Pixel 4 are stealing attention around the globe, there's a lot of intriguing (and cheap) stuff going on in the world of budget phones.

Sadly smartphone innovation isn't cheap – and most of it is reserved for high-end contract handsets. There is however such a thing as a good cheap smartphone, and ever so gently all those amazing features from the flagship devices are slowly trickling down to the budget phones.

That's why we have sorted through hundreds of inexpensive smartphones in order to rank the best options that you can buy unlocked without monthly fees and, importantly, without a two-year contract.

No, these aren't the best smartphones available in Australia, so you won't find the newly-announced Galaxy S20 Ultra among them. However, it is a selection of our favourite budget and mid-range smartphones. If you're looking to pick up a decent handset for not much cash, these are the top cheap phones your money can buy - even on a budget.

Realme is here to fill the void Huawei left behind

With its surprise arrival in Australia last year, Realme shook up the local budget smartphone scene by offering high quality handsets at prices that seemed too good to be true. Though it originated as a subsidiary of Chinese phone-maker Oppo, the company has since gone (mostly) independent, managing to garner a reputation for exceptional value in little-to-no time.

Realme XT is currently the company's flagship phone in Australia, and it's so good that it may cause you to completely rethink the importance of premium handsets. For less than AU$500, the Realme XT offers a Super AMOLED display, 8GB of RAM, 128GB of storage, a decent Snapdragon 710 chipset and a quad-camera on its rear that boasts a 64MP main sensor.

Add to this a pair of gorgeous colour-shifting gradient finishes, a large 4,000mAh battery with fast charging capability, the option to update to Android 10 and the inclusion of a headphone jack, and it's hard to fault the Realme XT. Granted, ColorOS is far from our favourite smartphone interface, and some water resistance would've been nice, but at this price point the Realme XT is very easy to recommend.

Bringing Samsung's penchant for beautiful design to the budget phone arena, the Galaxy A50 definitely has a premium look and feel despite its AU$499 RRP. Offering a gorgeous 6.4-inch AMOLED display, the Galaxy A50 immediately appears impressive upon first sight.

Running Samsung's updated One UI interface over the Android 9 OS, the Galaxy A50 admittedly feels a little sluggish in comparison to the company's flagship handsets, which we suppose is expected given that it's powered by a mid-range Exynos 9610 (10nm) chipset.

Still, we love that this budget phone can boast a triple camera setup that includes a fantastic ultra-wide lens, though admittedly you do have to put a little work into getting good shots with it. We also love that the phone still offers microSD expansion and a 3.5mm headphone jack – two things that are becoming less likely to be included in future smartphones.

A good smartphone that lacks pizzazz

Motorola has become one of the most reliable manufacturers of budget smartphones in recent years – a fact that's perfectly exemplified by its Moto G series handsets. We've come to greatly admire the way that Motorola's G series consistently delivers quality features at a fraction of the cost of your average premium handset.

Admittedly, the Moto G8 Plus doesn't look as pretty as some of the other handsets on the list, sporting a plastic build and rounded corners, but in terms of functionality it is has the edge on many of them. That being said, we wish its OS was a little snappier to use. Still, we like its big, bright display and appreciate the inclusion of a headphone jack – something that's becoming increasingly rare these days.

With its triple camera setup, the Moto G8 Plus is also capable of taking really nice photos. However, while the phone is able to record video in the ultra-wide format, it isn't able to take regular pictures that way, which is quite strange if you ask

The cheapest iPhone you can buy

The iPhone 7 might be the oldest iPhone (along with the iPhone 7 Plus) still sold by the company, but that also makes it the cheapest iPhone that's currently on offer, making it ideal for those who'd like to play in Apple's ecosystem without paying exorbitant amounts of money.

On paper, the iPhone 7 is outclassed by most of the newer Android handsets on this list in terms of camera and specs. However, Apple's A10 Fusion chip offers the handset great performance, and in the hand it definitely retains an undeniable sense of quality despite its age.

While it may have been replaced by two separate generations of iPhones, with a lower price tag and the latest iOS 13 software on board the iPhone 7 is still very much a viable option for those looking for a slice of Apple's smartphone pie.

A great option for gamers

Sporting impressive specs and a large, colourful display, Xiaomi's Redmi Note 8 Pro is definitely a good option for those who want great mobile gaming performance at an affordable price.

It's got a gaming-focused chipset in the Mediatek Helio G90T, offering exceptional performance on titles like Call of Duty: Mobile and PUBG. That's backed by a hefty amount of RAM, a huge battery and the inclusion of liquid cooling.

Looking at its specs on paper, the Xiaomi Redmi Note 8 Pro almost seems too good to be true. However, it is significantly let down by its MIUI software and an abundance of bloatware. Still, a bit of tinkering (and a lot of uninstalling) can significantly improve the phone's overall experience, making it a great option for the value-minded gamers out there.