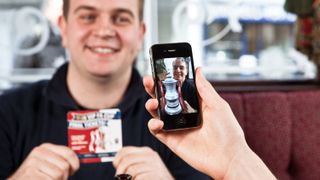 He shoots, he scores

For many augmented reality comes after seven pints and a kebab on a Friday night but in the tech world it is currently big business and one of the only ways you will be able to get up close and personal with the FA Cup.

Couple this with stories on Ikea creating its own DIY town in the UK, a real life Akira bike and news on Anonymous' plans for the Great Firewall of China and what you have is another jam packed News In Brief.

Two handles, one cup – Budweiser and augmented reality wizards Aurasma have teamed up to bring you closer than ever to the FA Cup. All you need is Bud's Man Of The Match app, a promotional beermat and some suspension of disbelief and you too can hold the FA Cup.

As augmented reality is better seen and not written about, check out the video below for some techie magic. [iTunes and Google Play]

Ticket collector – Want tickets to the Euros? Well, Sharp is offering free ones to those who buy its mega TV from Currys or PC world. Essentially customers who purchase Sharp's 70 inch mega-screen full HD LCD TV, priced at £3,999, and present proof of purchase online at www.sharp2012.com, will be entitled to a pair of tickets to one of three games of the UEFA Euro 2012 football tournament. We will also give you a gold medal if you can persuade your partner that you really, really need a 70 inch telly.

Build it and they will come – Ikea has decided that the UK hasn't got enough flatpack in its life and is remedying this by creating its own neighbourhood in London. It will be up for the Olympics and is set to be called Strand East. In all there's 11 hectares of Ikea goodness – but no word on what the meatball situation is. Let's hope there's no screws left over by the end of its completion [Crave]

Talent spotted – Mr Zip who appeared on Britain's Got Talent last week – don't pretend you don't know – with his 'catchy' Where Me Keys, Where Me Phone rap has been given a Wireless Leash to help him find his keys AND his phone by makers Zomm. This ladies and gentlemen is what you call PR tapping into the zeitgeist. Groan.

On yer bike – Sometimes people are awesome. And we qualify this statement with the following: someone has created a real-life, fully working motorbike modelled on the ones in Manga masterpiece Akira. It took Masashi Teshima from Fukuoka, Japan seven years and around £60,000 to make but the result is amazing. [SlashFilm]

Current bun on Currents – Google Currents has launched in the in the UK. The Flipboard style app offers up a nicer way to read web pages and has signed up The Sun, The Guardian and the Independent to show off the app. [Google Play]

Cracked China – Anonymous is looking to do its biggest hack yet, with news that the hacking collective is ready to down the Great Firewall of China. There's been a lot of empty threats from Anon lately, so it will be interesting if this one comes to fruition. [ZDnet]

Big in Asia – Google's Android OS has been given a major boost in China with news that Android is now the biggest OS in terms of market share in the country. The reason: ZTE and Huawei, their handsets are selling like hot cakes. [BGR]

Info overload – Facebook has updated its info archive so you can now back up IP addresses and friend requests. Launched in 2010, the archive is all about you – as in everything you have ever put on Facebook ever. Think of it as your own time capsule, without the need to bury it in your garden. [The Verge]