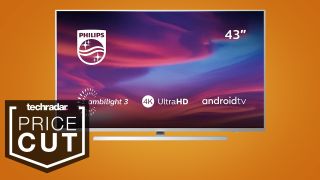 After a top-quality, but slightly more modest 4K TV deal in the Boxing Day sales? Well there's a top offer for you, with this Philips 43-inch set down to just £389. (Not in the UK, or just missed the deal? Scroll down for other TV deals in your region.)

It follows on from deals for similar 65-inch and 50-inch versions, completing a hat-trick of savings for Philips Ambilight 4K TVs.

This Boxing Day deal is available at Amazon, and sees the cost slashed by £160, taking the price down to just £389.

That's a great price for the Philips 43PUS7304, which offers a 4K resolution, Google Assistant and Android TV built in, and support for Dolby Vision, Dolby Atmos and HDR10+.

But better than that is the £659 option for the monster 65-inch set - check it out below to see what we mean for a 4K TV with the impressive Ambilight backdrop and Alexa onboard.

Philips Ambilight 65-inch 4K Smart TV: £659 at Amazon
This is one of the best large-screen TV deals we've seen out there for the Boxing Day sales - there's HDR10+, Dolby Atmos sound, smart TV apps (although not Apple TV at the moment) and the all-important Ambilight around the outside.
View Deal

Philips Ambilight 43-inch 4K Smart TV: £389 at Amazon
Bag yourself a 4K TV bargain during the Boxing Day sales with the 43-inch Philips 43PUS7304. It comes with 3-sided Ambilight, support for Dolby Vision, Dolby Atmos and HDR10+, plus the Google voice Assistant is built in too.
View Deal

As we mentioned, there are larger Philips 4K TVs also on offering in the Boxing Day sales, and we've found great discounts on 55-inch and 50-inch models.

Philips Ambilight 65-inch 4K Smart TV: £749 at Currys
A big TV deserves a big discount, and this 65-inch display from Philips comes with 4K resolution, atmospheric Ambilight, and support for both HDR10+ and Dolby Vision - this is a slightly higher model number, but the 65-inch above is a far better deal in our eyes.
View Deal

Philips Ambilight 55-inch 4K Smart TV: £509 at Amazon
55 inches is one of the more popular TV sizes around at the moment, and this set from Philips provides a great picture along with the ambiance of the firm's Ambilight rear-illumination technology. Plus you save over £100 with this deal.
View Deal

Not in the UK? We're constantly looking for the best TV prices near you.