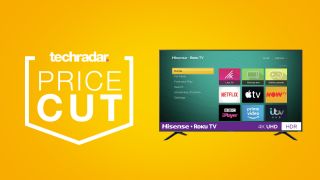 Looking to upgrade your TV before the new year? Well, now could be the perfect time as Argos has slashed the price of this 43-inch 4K HDR Hisense Roku TV in its Boxing Day sales.

Made by Hisense, this model is the first Roku TV in the UK and is being exclusively sold at Argos - so don't expect to pick this particular TV up cheaper anywhere else.

Hisense Roku TV 43 Inch R43B7120UK 4K Smart LED TV with HDR | £249 at Argos
This Roku Smart TV includes a range of apps such as Netflix, Now TV, BBC iPlayer, ITV Hub, All 4 and Freeview Play. And you can enjoy them all in stunning 4K HDR. With £80 off its usual price, it's better than ever.View Deal

This isn't the only TV deal we've seen around for Boxing Day. Amazon has Philips Ambilight 4K TVs for hundreds of pounds off, in some cases. Since it's likely to be the last major deals event for a little while, it's worth considering some of these offers if you've been waiting to buy a new TV.

Looking for the best offers in the Boxing Day Sales? Then check out the best Boxing Day sales and deals in 2019.