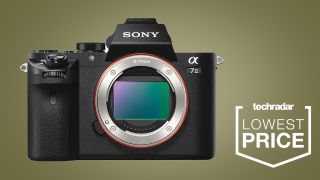 Been waiting for a full-frame camera bargain to pop up during Black Friday? This £999 offer on the Sony A7 II is the best one we've seen yet, as it gives you one of the best full-framers of recent years for its lowest price yet.

Sony's A7 series have rightly been hailed as trailblazers for mirrorless full-frame cameras in the past few years. Their combination of high-end features, compact design and seriously competitive pricing have left rivals like Canon, Nikon and Panasonic playing catch-up.

Although it's been succeeded by the Sony A7 III, the A7 II remains an excellent full-frame camera thanks to an all-rounder feature set that remains competitive with today's rivals, plus a host of recent firmware upgrades.

The A7 II combines a 24.3MP full-frame CMOS sensor, in-body image stabilization and a sharp 2.4-million dot electronic viewfinder to help frame your scenes. It also uses Sony's E-mount, which means it's compatible with both full-frame and APS-C format E-mount lenses, giving you a fantastic range of glass across all price points.

Sony A7 II: £999 at John Lewis
A great opportunity to pick up the full-frame Sony A7 II for its lowest price yet. The A7 II combines a 24.3MP full-frame sensor with in-body image stabilization and an OLED electronic viewfinder. John Lewis also includes a two-year warranty. View Deal

Still trying to decide whether or not to go full-frame? While every camera is a compromise in some way, full-frame cameras like the Sony A7 II are a particularly good choice if you like to shoot regularly in low light, due to their superior dynamic range and image quality at high ISOs.

They're also great for landscapes and portraits due to their shallower depth of field, which can produce some beautiful bokeh (or background blur).

The Sony A7 II packs these traditional full-frame advantages and, thanks to Sony's firmware update, now offers phase detection AF for Alpha-mount lenses and improved raw files too.

Considering it originally went on sale for £1,599 (body only), this is an unmissable deal if you've been considering going full-frame and taking your snapping to the next level in 2020.