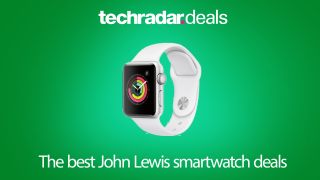 One of the most popular things to buy in the Black Friday sales is a smartwatch, with items like the Apple Watch 3, Samsung Galaxy Watch and Fitbit Versa all seeing new low prices, and there are many John Lewis Black Friday deals on these wearables.

If you’re in the market for a new smartwatch, some of these Black Friday discounts may look tempting, with some devices reaching all-time-low prices. Many retailers are offering similar prices on these devices, and no shops are offering uniquely low discounts, but there’s a reason you should look to John Lewis for your new purchase.

This reason is the John Lewis guarantee, and on smartwatches you’re getting a two year free warranty that protects your device against certain issues like breakdowns. Tech can encounter unforeseen problems if you’re using it for long periods of time, and with John Lewis you know you’re covered for two years of smartwatch fun.

Tempted? We’ve gone through the John Lewis website to find all the best smartwatch deals for you.

Samsung Galaxy Watch| 42mm | Bluetooth: £179 at John Lewis
The best smartwatch money can buy is its best price yet at £100 off. Sure, you're getting the smaller version of the device without LTE, but most people won't really mind. John Lewis has also added a two-year guarantee.
View Deal

Apple Watch 3 | GPS | 38mm £ £199 at John Lewis
This is the best price currently in the UK for the smaller version of the Apple Watch Series 3 and we're beginning to see the device drop below £200 for the first time. You'll also get a two-year gurantee with this because it's from John Lewis.View Deal

Apple Watch 3 | GPS | 42mm: £229 at John Lewis
Want the slightly larger version of the watch above? John Lewis has also discounted that one and it comes for an impressive price, plus you'll get John Lewis' two-year guarantee too.
View Deal

Fitbit Versa:   £139 at John Lewis
The Fitbit Versa is a fantastic smartwatch, especially for people who want a device with all the features of a fitness tracker, but then a little bit more on top. This isn't the lowest we've seen the price over Black Friday, with Amazon cutting an extra £10, but the 2-year guarantee makes it worth it.View Deal

Garmin Fenix 5 Plus: £399.99 at John Lewis
This is one of the priciest smartwatches you can find, but that's just because of how premium it is, with a rugged design, plenty of sports features and everyday activity trackers too. At this new low price, it's a bargain if you're looking for a serious smartwatch.View Deal

Apple Watch 4 44mm Aluminium: £459 at John Lewis
This is a decently low price for last year's Apple Watch 4, made sweeter because of the John Lewis guarantee. You can gain even more money off if you're trading in an older Apple Watch too.
View Deal

Not in the UK? Here are some of the best deals for smartwatches in the US.