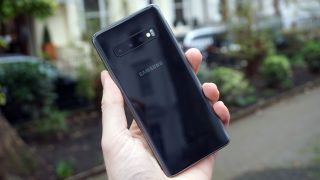 The Samsung Galaxy S11 isn't due until February 2020, but a steady stream of leaks have given us a pretty good idea of what to expect from Samsung's next flagship – and three new leaks offer more clues about the biggest S11 model, the Galaxy S11 Plus.

These leaks detail the battery size, camera specs, and rear design, of the S11 Plus (as we're expecting it to be called). The information comes from a range of sources, and we'll round it up for you.

As with all pre-release phone leaks, there are always reasons this information could be wrong, or fake, or both, so take it with a pinch of salt – but these rumors don't contradict what we'd already heard.

The first Galaxy S11 Plus leak details its battery capacity, which is set to be 5,000mAh, or 900mAh bigger than the battery in the S10 Plus. We've heard this rumor before, but this repeat backs up that assertion.

GalaxyClub managed to get its hands on a 5,000mAh battery that looks set to debut in the device – there's even a picture of the power pack, which clearly says 5,000mAh on it.

If it does indeed get this massive battery, the Galaxy S11 Plus could last for a lot longer between charges – although because we're also expecting the display to be a lot bigger than the one on the S10 Plus, it may not last a great deal longer.

Leak number two details the main camera on the Samsung Galaxy S11 (and presumably the S11 Plus too). We've already heard that this is set to be a 108MP snapper, but according to noted Twitter leaker @UniverseIce, it won't be the 108MP sensor we were expecting, but a completely different one.

The Galaxy S11+ uses a 1 / 1.3-inch 108MP Samsung exclusive custom sensor, which is superior in quality to ISOCELL Bright HMX and has a high cost.December 8, 2019

By saying 'exclusive', UniverseIce makes the distinction between the sensor it predicts we'll see in the Galaxy S11 sensor, and a previous 108MP sensor made by Samsung that debuted in the Xiaomi Mi Note 10.

According to the leak, this new sensor is much better than the previous one. We found the 108MP camera in the Mi Note 10 phone pretty impressive, and if the new sensor is even better, that could mean great things for Samsung's upcoming phones.

Leak three of three is some leaked pictures of the Samsung Galaxy S11 (or S11 Plus, it's not clear) in use. The pictures are rather blurry, but we can tell a bit about the phone from them.

The pictures, also shared by @UniverseIce, show someone scrolling the screen and taking a picture on what looks to be a pretty chunky phone.

The big news here is that the camera array is in a different location to those on previous Galaxy S phones. While on current phones the cameras are arranged in a  horizontal block along the middle of the device, this image shows a vertical array on the left of the phone's rear – it looks a lot more like the Honor V30 than prior Galaxy S phones, in fact.

Many leaks have pointed to the smartphone having this design, which you can detail in our Samsung Galaxy S11 rumor roundup, but there are a variations between the leaks, so we're not totally sure if there will be two columns of cameras or just one long one.

This change is likely down to the anticipated cameras taking up more space, with a 108MP camera and 5x periscope lens, amongst other components, needing a lot of space.

One caveat here, though, is that there's no confirmation that this actually is the Galaxy S11, other than the leaker's word. Sure, they're a reliable leaker, but this doesn't look much like we'd expected the Galaxy S11 to, so we're certainly taking the images with a pinch of salt.