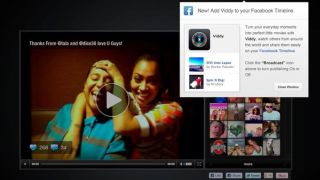 The social-networking giant has outlined four video sites whose apps are getting mountains of clicks when a video goes viral.

The sites outlined are Vevo, Viddy, Izlesene and Dailymotion. Given that only two of these are really well known in video circles (Vevo and Dailymotion), the open graph seems to perk up apps even if they aren't exactly household names.

Vevo, which has fully embraced Facebook and now filters all its registrations through the site, has seen "exponential" growth, according to Facebook.

There's been a 600 per cent rise in published content to Facebook through February to March and referrals from the site are up 130 per cent in the same timeframe.

When it comes to Dailymotion, there's now 2 million of its videos published on Facebook, while Viddy has become one of the most popular mobile apps on the Apple Store and has doubled its signings through opern graph. Turkish site Izlesene has seen a three-fold increase in video views.

Speaking about video and the open graph, Alex Himel from Facebook said: "Video apps [have seen] increased growth and engagement by building with the Open Graph and making it easier for people to share and discover videos on Facebook and their mobile devices.

"Early results show that as video clips go viral, so do the video apps and websites integrated with Open Graph."