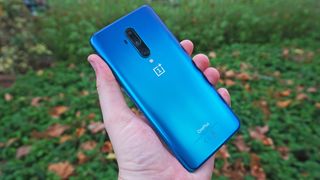 The OnePlus 8 Lite could have as many cameras as the OnePlus 7T Pro, above (Image credit: Future)

It’s rumored that a OnePlus 8 Lite will launch this year alongside the base and Pro models, but it looks like the phone might not be quite as 'Lite’ as we’d expected, at least when it comes to the camera.

That’s because an unidentified OnePlus phone was spotted by SlashLeaks during a talk show on which OnePlus CEO Pete Lau was a guest, which looks set to be the device.

A box full of phones was placed on a table, and one of the front phones packs the OnePlus logo but doesn’t appear to be any current OnePlus handset, as it has three camera lenses in the top left corner on the back. Interestingly though, it also doesn’t match an earlier leak, which showed just two rear lenses.

The source of that leak hasn’t disputed this latest sighting. In fact, they’ve updated their renders to match it, so it’s likely that the OnePlus 8 Lite really will launch with three cameras on the back, rather than two.

What does this mean for the base and Pro models of OnePlus 8? Well, perhaps they'll have even more cameras, at four and five respectively. We're not totally sure on this, though, because the OnePlus 7 Pro only had three cameras, so five would be a big step up.

Note that the phone shown from the front next to it isn’t thought to be the OnePlus 8 Lite by most sources. Indeed, it would be surprising if OnePlus included a notch of that size on a modern handset, even a ‘lite’ one. We can't totally rule it out, but previous leaks show a punch-hole camera instead.

As such, beyond the rear cameras and the dark blue color scheme there’s not much to see here, but we should get a clear, official look at the OnePlus 8 Lite fairly soon, as it’s expected to launch alongside the rest of the OnePlus 8 range during the first half of the year.