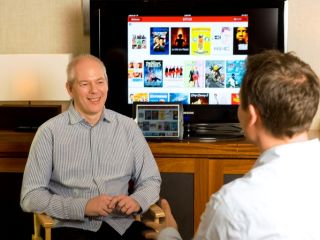 When Netflix launched in the UK back in January it marked a sea change for movie and streaming technology. In the US, Netflix is synonymous with movie rentals but its name is still associated with physical media – DVD and Blu-ray releases – even if its business model is significantly veering towards streaming.

This was punctuated when CEO Reed Hasting revealed he was splitting the two services – with the streaming side to keep the Netflix name and the DVD side to be renamed Qwikster – only to announce a rebuttal and keep the business as one.

While this separation never happened, it's clear with the proposed naming that Netflix sees its future in streaming and its streaming-only launch in the UK is a step closer to this.

With the UK launch, Netflix has shown that when it does just focus on streaming, it can enter a market fairly quickly and instantly give rivals a run for their money.

This is all because of the back-end technology Netflix is using – it's fully embraced the cloud and isn't ever going to look back.

The cloud, in this instance, belongs to Amazon - yes the Amazon that owns Netflix's nearest rival Lovefilm.

Over the last few years Netflix has migrated its streaming business over to AWS (Amazon Web Service), leaving its own data centres to manage the DVD business and corporate IT.

The man responsible for this significant computing shift was Adrian Cockroft, the company's cloud architect. British but based in the US at the company's headquarters in San Jose – "Hastings likes to surf" – Cockroft oversaw the company's migration to the cloud and believes this was one of the reasons the company could launch in the UK.

"We built a completely cloud based infrastructure in the US and did some work extracting it so we could actually deploy it anywhere," explained Cockroft to TechRadar.

"We set up a bunch of test machines in the AWS Ireland facility and we built the ability to replicate data across both sites. In total we set up 1,000 machines in Ireland."

In all the Ireland set up equates to around 10 per cent of the machines used for the whole of Netflix's streaming service. Depending on how popular the service is at any one time, there could be 10,000 machines powered up, according to Cockroft.

This is one of the reasons Netflix signed up to Amazon's servers. Using EC2 (Amazon Elastic Compute Cloud) it allows the flexibility to scale the number of computers used at any one time.

This has meant that Netflix hasn't had to spend out huge amounts of money buying up data centres in the UK, this money has instead gone to buying up movie deals.

"If you look at how we spend our money, you are typically paying in arrears for cloud capacity," explained Cockroft.

"It is a utility like your electricity bill – you don't go out and by a surplus of coal, you pay a month later for whatever energy you have used and that is what we have to do.

"If we had built our own data centre then we would have had to lay down a large amount of money in, say, six months in advance for a really efficient build out, and instead we could use that money to buy movies.

"We can pay for better content then after the event we can buy just the amount of capacity we needed to deliver it rather than having to over-provision how much storage we would need and probably getting it wrong.

"It's more about not having to commit large chunks of capital up front."

When it comes to storing movies, Cockroft tells us that there is more than a petabyte (1,000TB) of content available, with all of this processed on AWS.

"For every piece of content, there could be 50 or more files for it," noted Cockroft. "Different speeds and formats, and different files for audio formats, subtitles and things like that.

"When you hit play on a movie, we check the speed at which is best to stream it and this is monitored throughout you watching it.

"If you are worried about data caps, then you can change this to a lower setting so by default it will use less bandwidth."

Next Page Netflix in the UK
See more Internet news