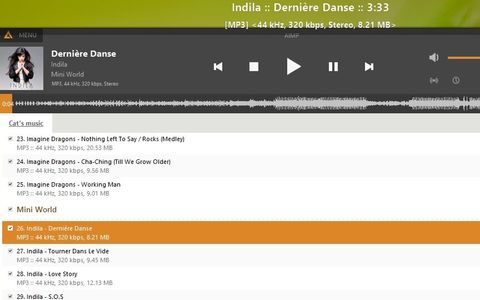 Even if you're happy with your current media player, give AIMP a try - you're likely to fall in love with its intelligent design and raft of music-tweaking options.

Calling AIMP a music player would be doing it a disservice. As well as playing music, the program also acts as an audio organizer, making it easy to change MP3 tags and create playlists.

Playlists are an interesting feature here because as well as curating them by hand, you can also take advantage of the smart playlist option to create something to match a mood with less effort. On top of this, the program can be used to listen to streaming internet radio stations. AIMP can function as an alarm clock, audio converter and more.

In addition to the regular application, there's also a portable version that can be installed on a USB drive and easily moved from one computer to another.

That's extremely handy, but what's most impressive about AIMP is the level of control it gives you over your music – and not just in terms of organization. The DSP Manager includes an impressive 18-band graphic equalizer, and there's a range of sound effects that can be applied to music during playback.

You can also tinker with speed, tempo and pitch settings. The timed shutdown and alarm clock function are very welcome additions too, as is support for an almost unparalleled number of audio formats.

This all good media players, AIMP has a unique look - this is certainly not your typical Windows program. It looks almost like a blend between a Mac and Linux app, and while this might sound off-putting, it works.

Once you have music playing, chances are you won't want to sit and look at the program (but if you do, you can enjoy a selection of visualizations) and AIMP has an interesting way of minimizing out of view. Rather than disappearing into a taskbar button, the program window disappears completely and can be accessed through a tiny tab that appears at the left of the screen when the mouse is moved near to it. This can be a little confusing if you're used to Alt-tabbing through applications, as AIMP disappears from view and can only be access via the side-of-the-screen menu.

Because AIMP has something of a different look to other programs, you might feel that it would be confusing to use, but that idea quickly evaporates. Basic playback options and playlisting are easy to use, and the audio converter -- which handles a highly impressive number of formats -- is a breeze to get into. For diehard keyboard users, there are plenty of hotkeys and keyboard shortcuts to ensure that program control and navigation can be achieved without ever having to lift your fingers from the keys.

The latest version of AIMP comes with an MP3 encoder, resolves an error that sometimes occurred when opening files via the right-click context menu in Windows Explorer, and fixes several other minor bugs. For full details, see the official release notes.