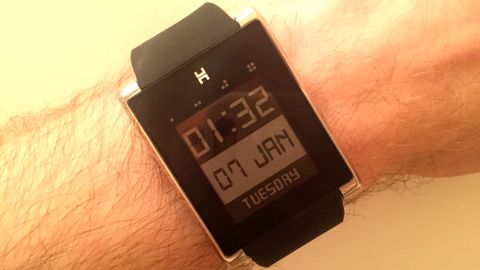 Originally championed for innovative gesture controls, the steeply priced Hot Watch Edge holds twice as many flaws as it does features.

When PH Technical Labs (PHTL) launched a Kickstarter for its $179 (£116, AU$230) Hot Watch back on July 31, 2013, it championed individuality through revolutionary innovation. This was a smartwatch that would transform your hand into a handset phone with palm-based calling.

Eager investors would eventually quadruple the initial $150,000 goal for the Kickstarter, thus driving development into full swing. It was believed that the Hot Watch would become so hot it would dethrone the popular Pebble, destroying multiple aspects of smartphone dependency.

The "most complete smartwatch ever created" would not only turn your hand into a phone, but respond to gesture controls (a feature most smart watches lacked), and voice recognition. Using only your hand, you could answer incoming calls, hang them up, illuminate a backlight; your voice could command both Siri and Google, all while reading notifications in the shower.

The Hot Watch first shipped in December 2013, and comes in four different styles:

I got my hands on the Hot Watch Edge, the more professionally styled edition of the bunch.

The LCD graphics face reminds me of electronic organizers or Tomogachis from the '90s. The retro style might not suit more modern tastes for colorful displays, like the Android Wear bunch. Though colored displays are a standard, Hot Watch justifies its lack of rainbow hues for efficiency.

Hot Watch features anti-reflective Gorilla Glass 3, claiming to (but failing in) reflecting an intrusive sun. Despite this, the crisp visuals of bold, black digital ink seeps in deeply enough to where it's noticeable in virtually any light.

LED illumination does a standard wrist watch lighting job, enough to get the job done. A bigger disappointment was the promise of smudge-proof touch glass. The Hot Watch is the king of smudge, enough to where you can feel it.

Displayed text and numbers are not only legible, but aesthetically pleasing to the eye. It's not like the gorgeous AMOLED display like you'll find on the Samsung Gear Fit, but it's enough to get the job done without murdering your pupils.

Next Page Design, interface and performance