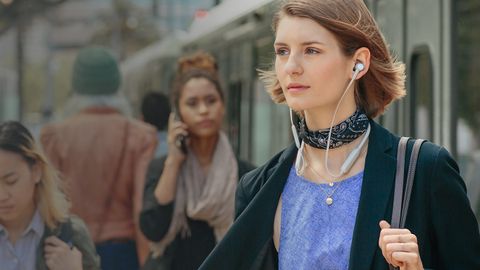 The Plantronics BackBeat Go 410 are excellent entry-level ANC earbuds. They offer good sound, a solid connection, and a handy auto on/off magnet to help preserve battery life. While their ANC and battery life aren’t the best, it’s hard to fault them too much considering their affordable price point.

In the past, active noise-cancellation (ANC) was an expensive feature that was only found on higher-end headphones - and very rarely on in-ear headphones.

While that's still somewhat true, today it's very possible to get an excellent pair of ANC headphones at a reasonable price - like, for example, the Plantronics BackBeat Go 410, which is available for $130 (£110, AU$200). For the price, you have a great-sounding pair of headphones with a strong wireless connection and ANC.

After testing the BackBeat Go 410 for several weeks, we came away impressed at the value they offer - sure, their ANC and battery life are just average compared to what's out there but, for an entry-level pair of ANC earbuds, they’re great.

The Plantronics BackBeat Go 410 are made out of mostly plastic and silicone, which makes them lightweight but, perhaps a bit cheap compared to the competition: Budget wireless neckbuds like the RHA M390 Wireless, for example, feel much better built thanks to its metal and silicone design. That said, while the BackBeat Go 410’s neckband is made of soft, flexible silicone, we wish the entire headphone was made of the same material.

Plastic-ness aside, the headphones still feel like a quality product with great fit and finish. There’s a small flap that covers the headphone’s microUSB charging port - another somewhat irksome feature considering that USB-C has replaced microUSB as the new de facto standard on most phones and portable devices.

The right earbud wire includes an in-line remote for power, playback and pairing, and the earbuds themselves are magnetic, which allows the headphones to automatically toggle ANC on and off when connected by a magnet, similar to the auto on/off feature on the OnePlus Bullets Wireless.

The earbuds themselves feature an oval-shaped tube and silicone eartips to aid in fit. The earbuds feel a bit bulky but they stay securely in place. The headphones aren’t meant for strenuous workouts but they are “sweat-resistant” according to Plantronics, however no IP rating was provided.

Overall, ANC is average, blocking out a good amount of noise but not as much as class leaders from Bose or Sony, due in part to its size but mostly the algorithm and hardware plantronics implemented in its approach. What's worse, however, is that there’s also a noticeable hiss when ANC is activated.

If there's bright spot in terms of the performance, it's the headphone’s strong, reliable connection thanks to the inclusion of Bluetooth 5.0 that prevented the headphones from skipping or dropping out in our daily use.

While the overall tonal balance of the headphones is a bit too warm out of the box, Plantronics does allow you to change that via the BackBeat mobile app, which lets you pick between “Bright” and “Bass” EQs and select high, low or off for ANC.

We found bass overbearing in some tracks but mainstream music sounds fun and dynamic. Mids are slightly recessed and highs have a good amount of energy, and detail and soundstage are about average for neckbuds. If you want better sound, you’ll have to step up to the Sony WI-1000X, which are twice as much.

The Plantronics BackBeat Go 410 are an excellent entry-level ANC pair of neckbud headphones for those looking to help drown out the noise of a plane or busy commute. While you can find more effective ANC elsewhere, you’ll be paying a lot more. While we had some issues with them, the core experience and solid sound quality are good enough for us to overlook the average battery life and ANC hiss.

In terms of competition, the Jabra Elite 65e feel and sound better built but its ANC is on par with the Plantronics BackBeat Go 410. For over twice as much, the Sony WI-1000X best both the Plantronics and Jabra in just about every metric.