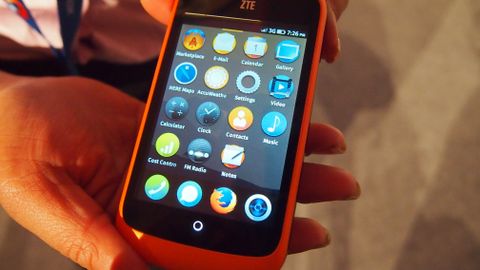 Firefox OS isn't even in its infancy yet, but it's clear that Mozilla, operators and manufacturers have one thing in mind for the OS - budget handsets for developing markets. The ZTE Open is a colourful, cheap option, although it's hardly iOS- or Android-beating.

We won't be seeing Firefox OS in the UK, US or Australia yet though - Firefox OS is being touted as very much a smartphone OS for developing markets.

As such, the Open will have a very low price point - when asked if it would be less than USD $200, the Mozilla representative told us it would be far lower, and networks themselves would make it cheaper still.

As you can see, the Open features a bunch of standard apps - all HTML5-based - including Twitter, Bing, Pinterest, Wikipedia and Facebook. Mozilla says it's easy for web developers to adapt web apps for the platform.

Here's the Firefox OS start screen featuring phone, messaging, web and camera buttons. You swipe from the right to get to the main app menu screens.

The Open's 3.5-inch display isn't that impressive, having quite a low resolution (HVGA or half VGA 480 × 320), while the device is centred around an ARM Cortex-A5-based MSM7225A chip manufactured by Qualcomm - the clockspeed of which could be either 600 or 800Mhz.

However, the OS was snappy enough on the device, putting aside fears from earlier builds that Firefox OS wasn't up to the job.

Mozilla has designed a Marketplace for Firefox OS, which it wants to be completely open for developers to take advantage of. There are also other default apps including Music and Video hubs.

As you can see, there's also a headphone jack and USB charging port at the top of the device.

Qualcomm has been working with Mozilla to ensure the Open has "tight integration" between software and hardware and that it's a "good telephony experience".

Like an iPhone, there is just a single physical button to move back to the start screen, while you also get volume adjustment on the side.

Firefox OS also has notification support and, like Android, you can quickly adjust settings here, too.

Acatel also has a phone coming out for Firefox OS, called the OneTouch Fire, while other handsets will follow from LG and Huawei.

Firefox OS isn't even in its infancy yet, but it's clear that Mozilla, operators and manufacturers have one thing in mind for the OS - budget handsets for developing markets and the ZTE Open is a colourful, cheap option. We probably won't see the OS on high end handsets any time soon, but that's no bad thing - while Firefox OS is likeable and flexible, it's hardly iOS or Android-beating in terms of feature set.