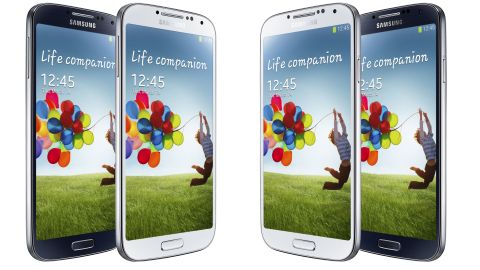 The Samsung Galaxy S4 is the most hotly anticipated smartphone ever from the Korean brand, and with a glut of top end features, it's the most powerful and desirable device Samsung has created yet.

One of the most impressive things about the phone is the fact the size hasn't changed from its predecessor - the Galaxy S4 comes in at 136.6 x 69.8 x 7.9 mm, meaning there's no extra heft to try and work with in your palm.

However, despite this fact, the screen on the S4 has been increased once more, to a whopping 5-inch display with Full HD resolution. This means the same amount of pixels you'd have seen on a TV that cost well over $2,000 four years ago is now riding around in your pocket.

Let's not pretend that Samsung is a pioneer in this area though: like a great many features of the Galaxy S4, the phone borrows a lot from the other top smartphones of the moment. Both the Sony Xperia Z and the HTC One have screens that rock the same resolution, but neither of them have the jaw-dropping clout of the Super AMOLED HD screen on offer here.

On top of that, there's a much faster processor packed under the hood, ample storage space for media thanks to an expandable memory card slot, and the likes of 4G, Bluetooth 4.0, NFC and pretty much any other connection you care to mention on board.

Samsung has tried to supplement this with a tranche of software upgrades too, meaning a more powerful camera, a better way to communicate with your friends and consume media, and interestingly a big push into health through dedicated apps too.

The Samsung Galaxy S4 costs the same as the HTC One, give or take a few dollars here or there, on contract. This will still put it around $65 per month, which isn't too bad for such a high design.

But before we dissect all the possibilities the phone has to offer, let's look at the design. As we mentioned, it's impressive in its form factor, thanks to the sub-8mm thickness, and at 130g it manages to still be light without shaving off so much heft that you feel like you've got a flimsy piece of plastic.

That's probably the biggest compliment we can pay the Samsung Galaxy S4 - where its predecessor felt a little bit cheap in the hand, the S4 manages to bring a much more solid build and better construction to boot.

So while the "faux metal" band makes a comeback on this model, it looks a lot more premium. And there's very little flex in the chassis when you hold it tightly, which was another problem with the Galaxy S3 at times.

That doesn't mean the that phone is completely remodelled from the S3 - it's very similar in appearance, so much so that a number of people asking to see it during our review thought we were palming them off with our old S3. The polycarbonate chassis remains, but that brings with it the faithful battery cover which conceals a removable battery and microSD slot.

We're not so fussed about the battery being able to drop out of the phone - so few people carry around a spare battery, and nowadays portable charging blocks are becoming so cheap and light that they make much more sense too.

We'd almost prefer something like the Sony Xperia Z, which has a refined and packaged chassis but doesn't need a removable battery: it makes use of a slot instead for the memory card. This integrated nature would make for a slightly more premium feel to the phone.

However, it's a small gripe with the S4, as while the cover feels flimsy, it's better than it was on the S2 and the S3, and they both sold like hot cakes.

In the hand, the Samsung Galaxy S4 feels much better than any other Samsung phone we've held (apart from the gargantuan smartphones the brand used to make - the i8910 Omnia HD might have been built like a brick, but it felt wonderful to hold). The screen's spread towards the sides of the phone means a much narrower bezel, and the effect is certainly impressive.

It might look very similar to the S3, but when you take the Samsung Galaxy S4 up close, you really start to appreciate the nuances.

We'd say it feels a lot more like the LG Optimus G range now - when we first picked it up, we were struck with how similar it felt in terms of sturdiness and the polycarbonate construction to the LG Optimus G Pro.

That's no criticism, as the device was well built too, but it has a similar rounded feel. This is intriguing given the history of the two companies, and shows more of a leaning towards the plastic shell from the Asian brands in general.

Buttonry has barely changed from before - the power button has been shifted slightly on the right-hand side, and is now much easier to hit. Samsung has clearly taken some lessons from the Galaxy Note 2, which has a really well positioned power/lock button.

The volume key is less easy to hit, and could be lower down in our eyes, but the travel on both of these buttons is satisfying, and you'll always know when you've hit them.

The plastic used on the home key has been upgraded too, with a more solid feel under the thumb when you press down to get back to the main home screen. The two buttons flanking it give you access to menus or take you back from whence you came, and while both are easily hidden, they light up nicely with an even glow when called into action.

There are loads of sensors on the front of the phone above the screen, including cameras to track your eyes, a 2MP camera for HD video calling and a proximity sensor for knowing where the phone is in relation to your ear. On the white review unit we had, their presence looks rather ugly either side of the generous earpiece, but on the darker models this is less of an issue.

The other notable addition to the design of the Galaxy S4 is the infra red blaster on the top of the phone. This allows you to control your TV, satellite box, DVD player, amp and even air conditioner, according to the reviewer notes. Again, this isn't a new feature, but it works well in practice, and despite being small is powerful enough indeed.

Other than that, there's not a lot more to say about the design of the phone, as it's just a little underwhelming. We know it's unfair to lambast a brand for not overhauling the design every year, but in the One X and the One, HTC has proven that it is possible to offer up a new design each time around and still keep things attractive.

Looking so similar to the Galaxy S3, you can't help but feel Samsung has gone a little too Apple and created something more in keeping with the Samsung Galaxy S3S - a minor update to a great phone to keep those coming out of contract happy that they have a premium phone to upgrade to.

We do implore you to get the phone in your hand before making a judgement though - while it's not got the best design on the market when it comes to materials, it's a big step forward compared to the Galaxy S3 and allows for a grippy and easy-to-hold phone, with a whopping screen inside.

To just dismiss it for being plastic would be doing the S4 a disservice as it has so much more going for it than that, but it's worth remembering that to a lot of people, the way a phone looks is as important as how much RAM it's got on board and how fast the CPU is - if not more so.